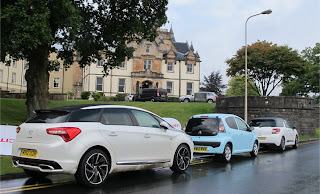 The deadline for voting in this year’s ‘Scottish Car of the Year’ awards closed at 10.00 am this morning, So any one of Scotland’s top 19 motoring journalists who hasn’t voted will be hauled up in front of the head teacher for a touch of the tawse!

Which is why Citroen was in Scotland yesterday where we all drove the new DS5 and Hybrid, and a few other models.

If Saab was previously the choice of airline pilots in the past, then the new DS5 will be its spiritual successor. It’s got more toggle switches and dials than a Lancaster bomber, and that includes a roof-mounted switch panel which stretches back from the top of the windscreen to between the front seats. 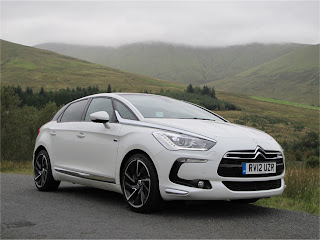 The new DS5 is slightly smaller than the previous C5, but here’s the thing, although it is extremely comfortable and roomy inside the car, it also feels a tad claustrophobic. For sure, there is plenty leg and shoulder room, but glazed panels with electric blinds in the roof constrict headroom and so does the roof-mounted switch panel. I didn’t bump my head, but anyone over 6 ft 1 inch might.

And that’s the only real criticism. The big car rides well, is quiet and well insulated from the road, and it looks really good. It also feels much smaller than it looks once you start driving it. Citroen are pitching it against the likes of Vauxhall’s Insignia and Volkswagen’s Passat CC, but I wouldn’t be surprised if some Merc and BMW owners took a good hard look at the finish and the toys. 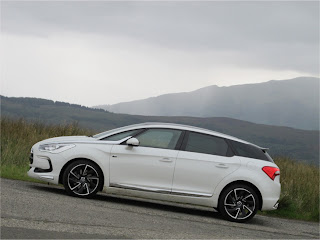 It’s always difficult selecting winners in the various SCoTY categories, but it was much more difficult than ever before this year. In the past there has often been one car which stands out from its peers, but that is no longer the case. The differences between marques and models are getting ever smaller.

For instance, how do you select which is the better car for the money – the Volkswagen Up!, Seat Mii or Skoda Citigo. Unfortunately we have to discount silly names and look at the offer, i.e. what do you get for the money? Each of the three manufacturers offers a quite different Spec in each car, from carpet quality to ICE options, so you can’t simply choose the cheapest. And then there are running costs, maintenance charges and dealer support.

And when it comes to sports cars, how do you differentiate between the MINI Roadster and Porsche Boxster? T’ain’t easy.

You’d also think that amongst 19 hard-headed, professional motoring writers that final choices would be quite similar. No way.

That would be like asking Ed Miliband to agree with Dave and Nick on the best curry and carry-out  - and then throwing Alex Salmond into the mix. Fall-outs and fisticuffs are never far away.
Posted by John Fife at 11:03