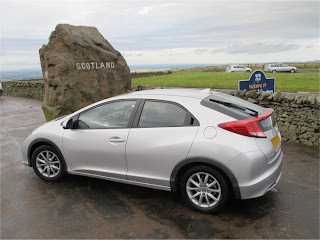 Forget overdrive gears, two-stage turbos and stop/start technology, Honda has a much more cunning plan to make people, drive more efficiently. It’s a very sophisticated plan, because only those who have a bit of motoring knowledge or a motor sporting inclination will be aware that to get the best out of a Honda, you have to give it the beans.

The reward is like kicking a haggis, and then kicking it hard. A soft kick on the rump merely arouses curious indifference, but a hard kick that penetrates its feather covered, plaid hide results in an explosion of fury and indignance. Just ask any furrin munro-bagger who has aroused the ferocity of such a creature when kicking it out of his way on a narrow mountain path. Hell hath no fury like a haggis spurned.

And so it is with Honda engines. The vast majority of folk will drive around quite happily never exceeding 5000 rpm and therefore totally unaware that beyond that figure lies dangerous territory. The trouble is that Honda engines perform perfectly well at low revs, and most drivers will never need any more than that. They are responsive and can be quite brisk, but to get the best out of them, you have to 'gie them laldy'.

And this is where Honda have really excelled themselves, rotating at such high revs the engine note rises to such levels that the average motorist will immediately take fright and back off, whereas, those who know better will suddenly find the scenery sliding backwards a helluva lot quicker. This is the play area, but it also sooks up the juice more quickly, and therefore not to be played with all the time.

And so it is that a Honda engine will more than adequately cope with the daily commute while providing some fun and frolics at weekends, but only to those who know.

Even with 140 bhp from 1800 ccs, the Civic I had this week was fast enough to be fun, but not dangerous. On the way down to the Lindisfarne last weekend, it was really quite enjoyable at times – between the cameras on the A68. This one was red-lined at 6700 rpm and that was where the fun was. This latest Civic, introduced earlier this year, also has much improved suspension over the previous model so it gives a better quality of ride.

Which bodes well for the new Type-R which is coming next year. The last time I drove a Type R I took it over the Humphy Backit Road between Breich and Forth, the kind of road where a stomach full of fried breakfast would be looking for an emergency exit, and the car was on the bump stops in every hollow.

Also, on the way home from the Lindisfarne, I saw something I had never seen before, a red squirrel in the wild. For sure I have seen them in a Nature Reserve at Aviemore, but not actually in the wild, although this one was nearly an ex-red squirrel. It darted out of the undergrowth and hopped across the road at Catcleugh reservoir in front of the Honda. Like the first cuckoo of spring, does that mean autumn is now officially here?
Posted by John Fife at 10:44