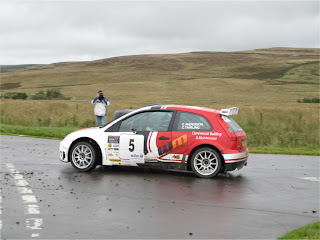 Chris Anderson scored his first ever outright rally victory on to-day’s Lindisfarne Rally. With Chris Thirling alongside, the youngster  held off Peter Taylor and Jack Morton to win by 4 seconds after 90 miles of sometimes dry, and often damp, Otterburn tarmac.

Going into the final 12 mile stage, Anderson had 13 seconds in hand over Taylor. Scanning the stage times ahead of that final 12 mile thrash, Peter surmised: “If I take a tenth of a second out of him every time I brake that should do it.” A local worthy suggested that when he got to his usual braking point he should count to three before hitting the stop pedal. At which point faither Keith chipped in: “Count to 7!”

Chris had got off to a good start n the first loop of stages with a 32 second lead over Taylor: “I goosed my best set of tyres in the dry, so I only had worn ones for the later damp stages, but there is grip to be had out there.”

Taylor spun too: “It was a flat left, only it wasn’t! I just got a wheel on the grass, then got it back, but it went off the other way. The car stalled and it took ages to start the hot engine, and it was stuck in fourth gear when I was trying to get it moving. And we still took 8 seconds out of Chris.”

There was an equally close battle for third with Ashley Field in the Darrian winning the place by 3 seconds from Bob Grant, two years to the day after Bob had his big woopsie on the Ranges. “I was rubbish on the first two,” said Bob, “but I was getting back into the way of it over the next two. And just when I was getting the hang of it I had to back off in Stage 8 because of sheep in the road.”

That meant there were three 2WD cars in the first three places, but Barry Lindsay in the 1600 Peugeot 106 was an amazing fifth ahead of Jim Sharp.

Ross Fernie finished 11th: “I backed right off over the final three stages,” said Ross, “I was driving for points in the Scottish Championship.”

Apologies for no updates during the day - Otterburn is a black hole as far as telephone signals are concerned!

( There will be a full Rally Report up on the website on Monday night )
Posted by John Fife at 20:35