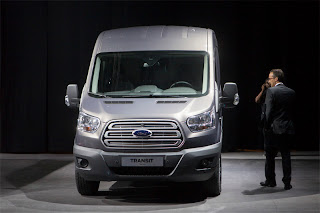 Ahead of the big Commercial Vehicle show in Hannover in two weeks time, here’s a sneak preview of the new ‘global’ Ford Transit. With the more recently announced awfy smart looking all-new Transit Custom aimed at the one tonne van sector and up against Vivaros, Transporters and  Vitos, this latest job is aimed at the heavier end of the market, from 2 tonnes upwards.

Even more importantly, it’s aimed at a global market, with Ford’s intention to sell it right across the world, and that includes America which has rather fixed views on its CVs.

The Americans are not renowned for being quick to adapt to European ways or adopt European fashion so Ford will have a big selling job on its hands, hence the rather ‘Americanised’ styling of the front end of the new van. The American Transit will replace the current E-series van in the States and will be built in Kansas alongside the Ford F-150 pickup. 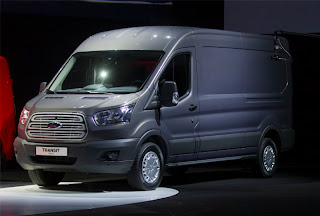 True to form, it will be available with two V6 petrol engines in the USA, although there will be a diesel option!

As for the European market, we will get at least three different power versions of the latest 2.2 litre Duratorq and the choice of FWD, RWD or All-Wheel Drive.

As for its looks and acceptance by the European market, I’m still unsure, but perhaps a matt black grille with some chrome highlights might just make all the difference.

Or maybe this is just the start of the softening-up process to try and convince us it’s handsome, because it won’t go on sale till late next year. That means Ford still has time to sound out public opinion.

At the moment it’s more tepid than cool.
Posted by John Fife at 15:13