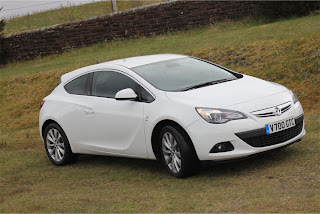 I’ve spent the past week in a Vauxhall Astra GTC and I must admit I was a bit ambivalent about it – till I took it to Kames the other morning to see the old cars on the Scottish Malts tour. There was nothing outstanding about the car and nothing bad, but for a car in the ‘hot-hatch’ category, it lacked a certain fizz, like a bottle of flat Irn-Bru.

Driving south on the M74 from Hamilton I took the slip-road past Happendon services and on to the A70, Douglas to Muirkirk road, and there I had a revelation. I saw the light. The Astra GTC is not a sports car, it’s a proper grand tourer - using the original meaning of the words.

In that ten mile stretch of tarmac fluidity there are no hairpins. Even the tighter corners round Glenbuck Loch serve only to provide a satisfying and enjoyable change of direction. As for the rest, the mixture of bends, complexes and short straights ensured a thoroughly entertaining twiddle on the steering and satisfying squeeze on the accelerator.

Wider than the previous Astra, this latest model has much more stability, allowing the driver to make more of the 1.6 litre turbo four’s 178 bhp. That means it can carry more speed into and through the corners rather than all this business of stamping on the brakes, down the gears and then getting on the gas on the other side.

More relaxed and just as quick, hence the ‘GT’ thoughts.

On the run back from Kames, that opinion was reinforced and the drive back up the motorway was conducted in a more mellow and thoughtful frame of mind. Maybe it’s an age thing, but this would be the ideal car for a run from Scotland to Le Mans with all the camping gear in the boot.

Instead of arriving breathless, excited and unable to comprehend the foreign tent erection instructions, the GTC driver would arrive relaxed, refreshed and ready for the fiendish far-eastern canvas challenge devised by an out-of-work Taiwanese monkey smuggler hell bent on exacting his revenge on the civilised western world which put him out of his original trade.

In other words, the ‘Grand Tourer Car’ badge on the Astra’s rump is a true description of the GTC’s real purpose in life.
Posted by John Fife at 10:52