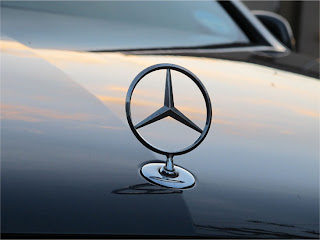 Whatever it is, the Merc still has it. Audi has thrown millions at image, BMW at engineering and Jaguar style, but nothing quite turns heads in my neighbourhood as the three pointed star. Does that say more about the neighbours than about the car?

The last time a car caused such envious looks was the Range Rover Evoque and before that – another Merc.

There was a time when Merc had fallen out of fashion, but it’s back, and the E220 CDI BlueEFFICIENCY parked outside my house has had grown men peering in the windows at the leather and small boys casting envious looks at the gunsight on the grille. 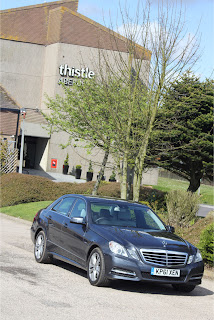 It’s not as blatant as a Bentley or as ostentatious as a Roller, but the new shape does have presence. It also has the engineering to match. On a return trip to Aberdeen and back, I was getting 50.5 mpg and that was without really trying, just normal ‘go with the flow’ motoring.

The car had the optional 7 speed automatic ‘box (6 spd is standard), which added 1500 quid to the price, and which made the most of the 170 hp from the 4 cylinder diesel. There was no real need for the steering wheel paddles as it changed gear as quickly as anyone would need buying this type of car, although there is a ‘Sport’ version, but it’s another 4 grand more.

It’s a roomy, comfy cruiser, but it’s fitted with low rolling resistance tyres as part of the BlueEFFICIENCY package, so although you hear the thump over pot holes, you don’t really feel it as the Merc’s suspension makes a good job of soaking it up, even with 17 inch rims.

So what has the new Mercedes got that others haven’t? In a word – Class. The use of the word ‘Class’ to separate the model range like ‘B’ Class, ‘C’ Class and ‘S’ Class is a marketing triumph. No need for fancy names and checking to see if the chosen model name means something rude in another  language, the use of this single word imparts something that even an overloaded WAG can’t buy – class.

The big surprise is the price. It’s comparable with a top end Ford or Vauxhall. Now I know Ford and Vauxhall have made huge strides forward over recent years in quality, comfort and reliability, but so has Merc.

On that basis, Merc is back. The only downside is that the man came to take it back yesterday.
Posted by John Fife at 09:14