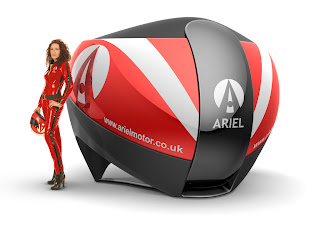 Spotted at the Gadget Show in London was this unusual looking and ultimately desirable device (the unit not the burd!) called the TL1 Racing, Flight and First-Person-Shooter Simulator.

Designed, developed and manufactured in the UK by Motion Simulation in cooperation with the Ariel Motor Company (yes, the same one that makes the Ariel Atom), the TL1 houses the world’s first portable 180 degree, spherical projector screen and variable driving position cockpit. 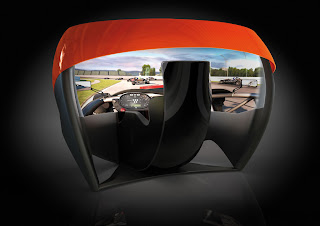 The TL1 simulator runs up to three ultra high definition projectors with a single, seamless seven million-pixel image on a wrap-around screen. Measuring over two metres wide and providing 180 degree vision, total realism is guaranteed, from landing an Airbus to battling a Chieftain Tank.

The unique seating system can be rotated to go from Touring and GT car positions to Eurofighter, up to a Starfighter or Formula 1 car. Running the best simulation software titles that include laser-scanned racing circuits, accurate to within 2mm, it can replicate the full driving experience, down to every bump in the road.

Compatible with PC and games consoles, including PS3 and Xbox 360, the TL1 is available from Cockpit only (TL1c) to a full plug-and-play TL1 unit, including body, screen, cockpit, PC, projectors, professional controls and software.  Options enable the customer to specify their own particular use and requirements.