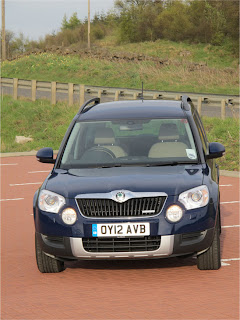 The odd thing was, this week’s press car attracted almost as much interest as last week’s, and yet the two are worlds apart in image – although that situation is changing these days. Whereas the Merc generated pangs of male desire, this week’s Skoda Yeti attracted the school-run brigade.

Rugged enough to mix it with the serious 4x4s on the school run, yet ‘green’ enough to allow users to be smug when they pull up outside the school gates in the shadow of some giant shouty auto-chav Gucci travel bag.

In fact, the lady in the Honda Jazz stopped by once on the way to school and then again on the way back for a second look having dropped off her wean.

And that’s where this particular Yeti scores. It’s the ‘Greenline’ model which has been optimised for fuel efficiency and is only two wheel drive. That means it’s not quick, but it’s frugal.

And therein lies the biggest surprise. With a modest 105 hp and a nought to 60 time of 12 seconds, the sporting motorist wouldn’t give it a second glance. That would be their loss. It’s a hoot to drive. 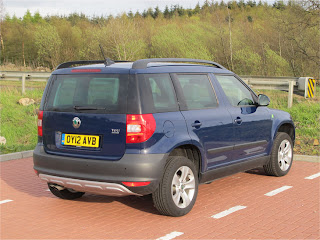 The car rides and runs well, is quick through the five gears once on the move and drives like it shouldn’t. It’s as much fun on a twisty road as an MX5, but everything happens slower so you get more time to savour it.

And because it has an SUV style body it has bags of room inside for four/five adults, a decent boot and flexible seating to carry all manner of shopping needs and domestic junk. In other words it’s a remarkably good family car.

The only drawback is that putting one of these on the road won’t give you any change out of 20 grand. In other words, Skoda is not a cheap brand anymore, but the good news is that it lives up to its name and its price tag.

On that basis, there’s nothing abominable about this Yeti.
Posted by John Fife at 16:31