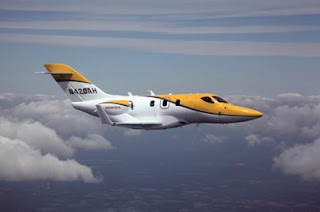 This is a Honda, but not as we know it. The Honda Aircraft Company has just successfully completed its first test flight of its fourth conforming flight test aircraft, the ‘F3’. This latest HondaJet test model demonstrates the latest new product enhancements in its avionics and cabin management systems.

These include a new 60/40 display configuration on the Garmin® G3000 Primary Flight Displays for the flight deck, a new Cabin Management System (CMS) and updated production aircraft interior. The new available CMS enables passengers to use a wireless mobile device, such as a tablet or smartphone, to view real time flight information and to control the HondaJet cabin’s lighting, temperature, music, and window shades for enhanced comfort and productivity.

The Honda Aircraft Company is a wholly owned subsidiary of American Honda Motors Inc. and was founded in 2006 following more than 20 years of aeronautical research and development. Headquartered in North Carolina, the company has a 500,000 square feet R&D, Manufacturing and Administration facility to develop, produce, market and support the aircraft with HondaJet dealers.

The HondaJet is the fastest, highest-flying, most quiet and most fuel efficient in its class. The two highly fuel-efficient GE Honda HF120 turbofan jet engines are uniquely mounted in over-the-wing-engine configuration to improve performance and fuel efficiency by reducing aerodynamic drag.

Honda's first-ever commercial aircraft therefore lives up to the company's reputation for superior performance, efficiency, and value. No doubt Mr. Soichiro Honda would be very proud of the Honda Aircraft as it fulfills one of his long-standing dreams to advance human mobility skyward.