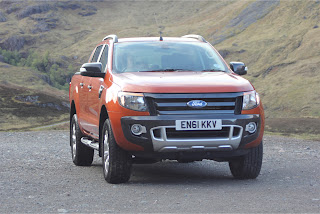 If I was surprised by the amount of interest generated by the Mercedes-Benz E220 and the Skoda Yeti which I had recently, then I was quite taken aback by the interest shown in the latest arrival. It was the 3.2 litre Ford Ranger Wildtrak. No doubt the glowing bronze, WAGged orange paintwork attracted additional attention, but on my arrival at the Fort Augustus Gravel  Sprint last weekend, it attracted interest like midgies to a peely wally English tourist.

Not content with looking, it was a case of ‘Open it up and let us sit in it mister.’ Considering these were mostly rally types, the 3 tonne towing limit was part of the appeal, but so too was the spacious cabin. Another potential punter wondered if it would double up as a family car. Not only does he run a rally car, but he has a property development business so was interested in its use as a business vehicle and therefore able to claim the 20% VAT back.

Naturally, fuel consumption was uppermost in folks minds, but on the 150 mile trip north up Loch Lomond-side and through Glencoe I was getting 29.6 mpg. Not bad from a 3.2 litre oil burner and a vehicle with the aerodynamic slipperiness of a caber. And I wasn’t hanging about despite the numbers of the early rising, Munro-bagging woolly hats and clumpy boots cluttering up the verges.

But it just shows how much I know. There was no Spec sheet in the Ranger when it arrived so when I started it up and drove it north I actually thought it was a V6, it sounded so gruff and good.  On the way back I thought about it some more and decided it wasn’t a V6, and yet it had power and torque to spare to get past campervans, caravans and other finger pointing tourists ogling the sights as they weaved around the Highland roads. 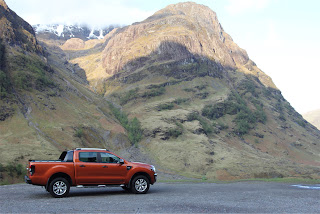 So I checked. The V6 is only for the American, South African and Australian markets. What the British top spec pickup had was the 5 cylinder unit out of the biggest of the Ford Transits. No wonder it sounded so good, and no wonder it had the poke to deal with dodderers, although there are two other versions of the pickup with 125 PS and 150 PS versions of the four cylinder, 2.2 litre engine.

As for ride quality. No fears. The previous Ford Ranger had the best ride quality of any pickup on the market. To put that in perspective, you will never get as good a ride in a pickup as any other ‘soft-roading’ SUV. That’s down to the suspension. To qualify as a business vehicle, a pickup must have a payload in excess of 1 tonne, and on that basis it needs a set of beefy springs at the back to cope.

That does not always translate to a smooth and supple ride for everyday use, and is also one of the reasons many folk using it for domestic duties put a couple of bags of sand, or a ladies handbag (or whatever) in the back to take the sting out of the leaf springs.

Despite that, Ford had made a heckuva job sorting out the quality of ride in the old Ranger and they’ve done it again with this one. For sure, it still jiggles a wee bit on uneven surfaces, but it does have an energetic ability to soak up bumps and undulations with only the sharper edged pot holes and Edinburgh’s cobbled streets generating a jiggly ride.

And here's a thought, the ride quality of the new Ranger is far superior to some supposed overstuffed exec saloons which have sexy giant alloys clothed in rubber bands - and I know which I would rather have - and has more presence!
Posted by John Fife at 12:23