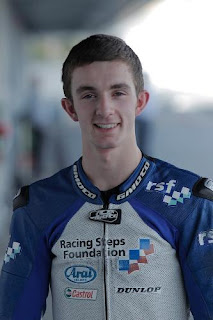 What is 18 years of age, built like a twiglet and goes like a bumble bee with its bum on fire? John McPhee.

The Oban youngster is following in the wheeltracks of Donnie MacLeod, Niall MacKenzie, Steve Hislop and Stuart Easton and rapidly making a name for himself in motor cycle racing.

Backed by the Racing Steps Foundation the KRP rider has been awarded one of the two wildcard entries to next month's MotoGP World Championship fifth round at Catalunya on the third of June.

McPhee currently lies second in Spain's CEV Buckler Moto3 Championship and this will be his fifth Grand Prix wildcard. Previously he raced in the superseded 125GP category, claiming his best result - and first World Championship point for 15th - at the British Grand Prix last year before going one better at the season-ending round at Valencia.

His selection recognises the progress he has made since stepping up to the new 250cc four stroke class in the CEV series in April. He finished his first season in the ultra-competitive Spanish championship in 10th place in the rider standings in the 125GP series last year and has racked up podium finishes in each of the successor Moto3 rounds staged so far. 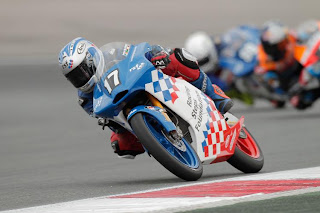 John welcomed the wildcard saying: "I'm delighted and really excited about it. I secured top 15 finishes in the Grand Prix at Silverstone and Valencia last year in the old 125 two-stroke class so obviously the aim is to try and better that this time around. I'm under not under any illusions as to how hard that's going to be. But I'll definitely be giving it my best shot.”

"The new KRP bike has shown itself to be competitive in the CEV championship and gets better race-by-race as the team introduces new parts and tweaks. So Catalunya will be a good test as to where we stand in relation to the bikes being run by the Grand Prix teams.”