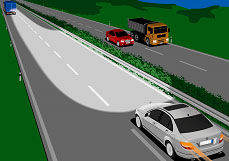 One of life’s more dazzling, and yet intensely annoying, inventions these days is bi-xenon headlamps. I know they are not supposed to dazzle other drivers, and they are supposed to adjust automatically to oncoming traffic, but they still friggin’ annoy folk.

And that’s the ones that work. All too often the adjustment has failed or is slow, or the lights are out of alignment leaving you seeing spots as they go by. And that’s when weather conditions are good. When it’s wet and dreich the effect can be positively dangerous.

They also don’t seem to consider those of us who live in hilly countries. Every time an oncoming car crests a rise, they dazzle the poor sods coming towards them, because they don’t react quickly enough to cope. Even ‘sleeping policeman’ and speed bumps  in built up areas cause a flash like a paparazzi’s camera when coming towards you.

Surely we don’t need lights this bright when there is a blanket speed limit of 70 mph in this country, do we? The only time we need to turn night into sunlit day is when rallying through forests in the wee sma’ hours.

So that’s why a new idea from Mercedes-Benz sounds interesting. Buried away in the 20 page (and that’s the short version) Mercedes-Benz E Class Press Pack is an explanation of the optional ‘Intelligent Light System’ which unfortunately wasn’t fitted to the E220 I was driving last week, but I wish it had been. It would have been good to try it out.

This new system has five separate modes, but the really interesting one is the ‘Adaptive High Beam Assist’ which uses a camera on the windscreen to recognise oncoming traffic and vehicles moving ahead. This controls the headlamps so that their beams do not reach the other vehicle while providing good illumination. The range of the dipped headlamp beams can be extended from 65 to up to 300 metres. If the road ahead is clear, the system performs a gentle transition to high beam.

There’s a ‘Motorway mode’ too, which comes on automatically when driving above 56 mph and increases the driver’s range of vision by up to 60 per cent. This lighting function is activated in two stages: the Intelligent Light System first increases the output of the bi-xenon lamps from 35 to 38 watts providing better illumination of the road ahead and verges. The second stage activates at 68 mph and above, when the beam of the bi-xenon module on the driver’s side is elevated slightly. Motorway mode has a range of around 120 metres, and the driver is able to see about 50 metres further at the centre of this cone of light than with conventional low-beam headlamps.

Other attributes are enhanced fog lamps and headlamps which swivel when cornering. All very cunning and interesting.

And for those cars which don’t have such an intelligent system, how about a certain Aston Martin DB5 - with machine guns behind the sidelights. That would fix ‘em!
Posted by John Fife at 14:32