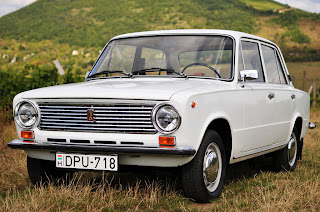 The news that Renault and Nissan are investing some $750m in Avtovaz, Russia’s top-selling carmaker, prompted thoughts (fears?) that the endearing Lada Riva will be revived.

It brought back happy memories of the Lada Challenge, a very cheap way of getting into rallying in the 80s when a complete car could be bought for a hundred quid (and that was a dear one, fifty quid was the going rate at the time!) at a local scrappie – sorry vehicle recycling centre.

In 1200 cc form the cars were virtually unbreakable and therefore ideal for newcomers to the sport. They were also very simple mechanically, and a doddle to maintain. It was also very difficult to have a high speed accident, since horsepower and aerodynamics were in short supply, and with the outcome usually being that whatever the Lada hit, came off worst.

Currently, Renault, Nissan and Avtovaz between them sell about one in three cars in Russia’s 2.7m-strong car market. Carlos Ghosn, Renault and Nissan’s chief executive, said they will support the Russian company with platforms and technologies, and to use “the enormous resources that they have on the Russian market for their own benefit, but also for the benefit of Renault/Nissan”. By the time Renault and Nissan have paid their staged payments, they will hold a majority 67.13 per cent stake in the joint venture by 2014.

Avtovaz makes Lada cars at one of the world’s largest car plants in the Volga river city of Tolyatti, and although it nearly went under during the financial crisis in 2009, Vladimir Putin waded in with an ultimatum to Renault to help keep the company afloat. It was kept afloat!

More recently, Russia’s market has revived and is now Renault and Nissan’s third-largest after China and the US.

Note: There is no truth in the rumour that when Irn Bru ran out of girders in the early 80s, they bought a job lot of Ladas to tide them over. They bought some old Hillman Hunters instead.
Posted by John Fife at 14:08