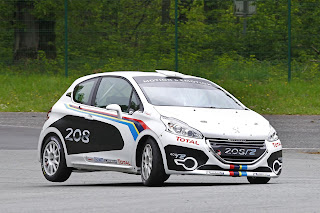 Running ahead of next week’s Tour de Corse Rally, the fourth round of the IRC, will be the new Peugeot 208 R2. Driven by Stéphane Sarrazin and Benjamin Veillas this will be the first public outing of the replacement for the current 207 RC Rallye.

Two other versions will be revealed later in the year. A circuit race car, similar in spec to the R2, will appear first followed by an R5 version which will take over from the 207 Super 2000 rally car at national and international level. It is due to be unveiled in September.

The 208 R2 ran for the first time at the end of 2011 and Peugeot is upbeat about its chances against the R2 cars of Ford, Renault and Citroën. The 208's bodyshell is approximately 40 kg lighter than the 207 while extensive weight-saving work has lowered the centre of gravity, which coupled with the long wheelbase and short overhangs should provide outstanding road holding.

The naturally-aspirated, 1600cc engine is based on the 1.6 VTi available for certain versions of the 208 road car, with the engineers claiming that the 185 hp was achieved with ease despite the strict regulations governing the use of standard parts.

The gearbox, too, is new. Identical to the 207 S2000, the 208 R2 has a five-speed, manual, sequential gearbox with the lever mounted on the steering column.  The lever is much shorter and also positioned higher, while the shift is more direct and precise because it is in line with the gearbox. The system is much more rigid since it is shorter and lighter. The gearbox itself features innovative cooling with an air duct at the front of the car which channels cooling air to fins built into the front part of the casing which help dissipate heat and cool the oil.

The car sits on three-way adjustable dampers, plus a new, bespoke adjustable hydraulic bump stop which has been developed in association with Öhlins. The R2 also features a specific wishbone arrangement which increases suspension travel.

Peugeot Sport Racing Shop will take orders now - for delivery in November, so you've got time for your Lottery numbers to come up.

British enthusiasts will be able to get their first glimpse of the new car on the Ulster Rally in August – provided it gets through its Homologation OK, which it will!
Posted by John Fife at 21:30