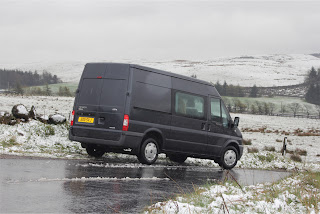 Folk were having a good laugh at my expense last week, the Transit is still sitting on its Goodyear Winter tyres. Yesterday, I had the last laugh. It was snowing hard on the high ground around Shotts in the morning and the roads were white. On the road past Kirk O’ Shotts, the Transit was out and passed a couple of cars which were tip-toeing along. Conditions weren’t really bad, but it is surprising just how much more sure-footed the Transit is in such conditions with its deeper, wider tread pattern and softer compound.

But the whole point of the exercise is to see how these Winter tyres perform in the Summer months, so I’m not about to change back to the standard Goodyear Cargo G26s any time soon. Apparently a number of van fleet operators are planning to keep Winter tyres on their vans all year round, at least in Scotland. There is merit in the idea, as yesterday proved. Winter ain’t over yet.

According to Goodyear, these Winter tyres also perform better in the wet. And what does Scotland have plenty of during the Summer months?

So the experiment continues. I have noticed that the Winter tyres are slightly noisier in dry conditions than the standard tyres, but whereas you will get away with this in a commercial vehicle, it might not be acceptable in a saloon car. It’s also claimed that they wear out quicker when the roads are dry and temperatures are higher. And that’s of interest too. Is it worth keeping two sets of tyres, or will the higher wear rate work against the idea? Time will tell.

Sadly the snow didn’t last long, by the time I returned home the fields were still white but the roads were mostly black.  On a couple of stretches there were black wheel tracks on both sides of the road with a layer of slush between them. That is usually enough to stop people trying to overtake, going from grip to slip and back to grip, but purely in the interests of science and curiosity I swerved the Transit from side to side just to see what it was like. No problems, although anyone coming along behind and finding my wandering tracks must have thought the local drunk was going for his weekly cairry-oot.
Posted by John Fife at 08:26