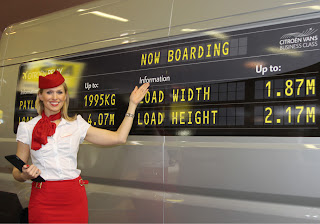 One of the recurring and more enjoyable presentations at any commercial vehicle show or presentation these days is the Citroën Vans ‘Business Class’ theme. This always bring a touch of colour and glamour to any show and brightens up the day and lights up the faces of all those who pass by. 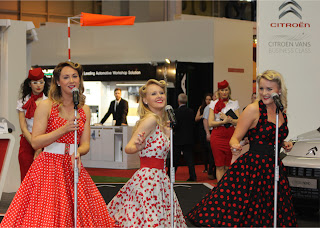 And this year’s CV show was no exception. In addition to the uniformed ‘air hostesses’ Citroën had invited the Spinettes to perform, an all-girl group who sing songs from the 40s, 50s and 60s - when music was musical and lyrics were lyrical.

Admittedly much of their repertoire is before my time, but I’m still a fan of Glenn Miller and his music and the girls performed many great numbers from those days including ‘In the Mood’, ‘It Don’t Mean a Thing’, ‘Don’t Sit Under the Apple Tree’ and many, many more.

I could have sat there all day munching the Citroën bacon rolls and drinking their tea being serenaded by the Spinettes, but duty called. 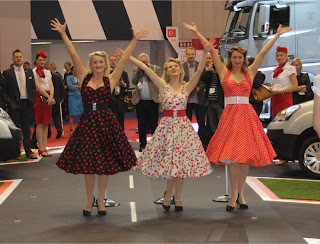 There were no new vans to see, but it’s perhaps worth mentioning that both Berlingo and Dispatch vans can now be specified with Grip Control systems. This includes ESP, Traction Control and Hill Start Assist and comes with Michelin Agilis tyres. There are four modes in this anti-skid, enhanced traction system covering normal, all-terrain, snow and sand conditions.

It’s not four wheel drive, but with an electronically controlled limited slip differential, it’s surprising just how far off the road you can take these vans - and get them back again. Ideal for forestry, landscaping and utility workers who need a bit of additional traction but without the expense of full time four wheel drive.

Anyway, I did ask the girls for their numbers, that is, the titles of the numbers they were singing, but I think they took my request the wrong way. Besides their ‘minder’ was bigger than me.
Posted by John Fife at 12:19