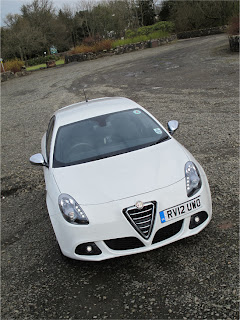 Alfa Romeo was in Scotland over the past couple of days to launch its latest twin clutch gearbox in the Alfa Romeo Giulietta TCT. Unlike the VW/Audi wet-plate ‘box, the Fiat PowerTrain developed unit uses a dry-plate arrangement.

Coupled with the fact that Fiat is building some damn good engines these days, both diesel and petrol, the 6 speed TCT gearbox marks another technological step forward and makes the most of even small capacity engines.

There are three modes to the gearbox with full ‘throw your left leg out the window’ automatic, plus a manual stick-shift sequential option and paddles. On the whole it works pretty well, but it can be caught out on occasion, such as slowing down on the approach to a roundabout. If the driver spots a gap and then floors it, the ‘box has a wee think to itself before it drops a gear or two and goes for it. That type of situation can catch out most auto boxes, so it’s not a criticism of the Alfa ‘box just something the driver has to be aware of. 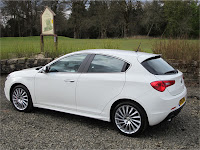 On the other hand, using the manual stick-shift will allow the driver to hang on to his or her chosen gear for as long as he or she wants. The paddles are more gimmicky. They work well, but revert to ‘auto’ mode if not used for a few seconds, although that’s probably more of a software setting issue than a mechanical hiccup.

The ‘box is particularly well suited to the 2 litre, 170 bhp MultiJet diesel but it works equally well in the 170 bhp, 1.4 litre MultiAir petrol engine, a small capacity engine which has more powerful ambitions! Alfa also revealed that it is working on a 1.8 litre MultiAir engine which is destined to go into production next year and will be capable of producing 300 bhp!

Over recent years Alfa Romeo has been working hard on turning around the public perception of its products, fast but flawed, and the new Giulietta with its TCT ‘box will further enhance that process. Build quality is good and it feels pretty taut with Fiat engineers predicting a 250,000 mile ‘life’ for the clutch plates.
Posted by John Fife at 07:27