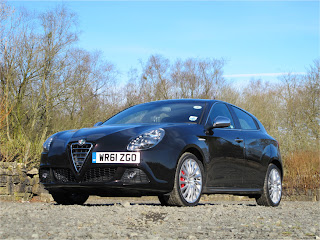 Having spent yesterday afternoon driving around in a 2 litre diesel and then a 1.4 litre petrol Giulietta Lusso (17 inch rims), I took to the same route this morning with a 1.4 petrol Giulietto Veloce on the optional 18 inch rims and revised my opinion of the FPT gearbox.

Yesterday I played with the automatic box and the paddles, in both Normal mode and Dynamic, but this morning I stuck to the manual stick-shift and the Dynamic mode. What a difference.

Unlike the paddles, the manually operated ‘box does not revert to automatic mode if left to its own devices. The driver can select the gear and the revs depending on mood. Well, up to a point. Those cunning Italians don’t allow the driver to over-rev the wee beastie, or to upshift when the revs won’t pull the gear and downshift if the revs are still too high. In other words, the ‘box is still smarter than the average driver – which probably includes me too. 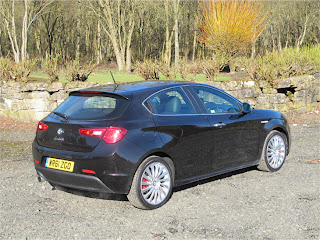 Having accepted that the ‘box is smarter than me, I just got on with driving the thing and forgot about the electronic wizardry. And unlike some autos, there is no need to feather the throttle. Upshifts can be made with a simple tug backwards of the gearshift, while the right foot remains buried in the carpet. These clutchless upshifts are just as fast as the mechanics and electronics allow, while downshifts are accompanied by a slight blip on the throttle as you push the lever forward. There’s just one problem with that, the engine is so quiet, you barely hear it.

The route took in the ‘humphy backit’ road from the traffic lights at Breich towards Forth, and although the 18 inch wheels transmit more bumps and thumps than the 16 inch standards on the diesel, they didn’t half stick to the road. Having said that, the suspension is pretty good with minimal roll on the corners and even tackling the ‘yumps’ as fast as the speed limit allows, there was no bottoming out. Nothing grounded.

I wasn’t too keen on the steering to begin with. At slow speeds it requires a determined tug to turn away from the straight and narrow, and then another tug to get it back in line, but once the speedo gets agitated, it’s fine.

Alfa say it will get off its mark and hit 62 mph in 7.7 seconds, but it never sounded that urgent.  And that’s the biggest surprise, it’s not like the Italians to miss a trick when designing exhaust systems. A bit more noise is needed, it’s got everything else.
Posted by John Fife at 16:08