Ford Motor Co has just released the first official pictures of the all-new Ford Transit Custom which will make its global debut at the Birmingham CV Show in the NEC next week. 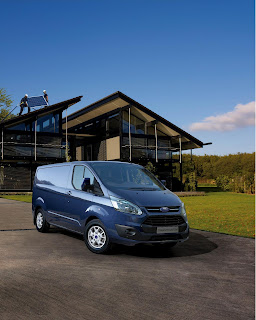 From launch, there will be a choice of short wheelbase (overall length 4.97 metres) and long wheelbase (5.34 metres) versions, and the latest version of Ford’s 2.2-litre Euro-5 Duratorq TDCi diesel engines in 100 PS, 125 PS and 155 PS power ratings. Auto-Start-Stop will be a standard fit and fuel consumption of 42.8 mpg (174g/km CO2 emissions) is being claimed.

Payload capacity ranges from 600 - 1,400kg depending on spec and options, with larger and higher payload Transits coming later in 2012.  These models will be extensively sold on a global basis, including North America, and will also feature rear-wheel-drive.

Production of the new Transit Custom will start from mid-2012 at Ford’s plant in Kocaeli, Turkey, with market availability later in the year.

On a personal note, I hope they haven’t changed the driving seat. The current Ford Transit seat is still the best in the business, but Ford will introduce a long overdue adjustable steering column – perfection predicted!
Posted by John Fife at 09:47