RallyX - No night race at Knockhill 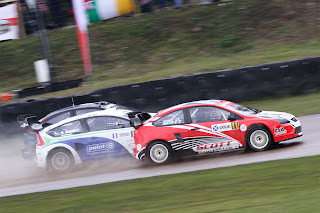 The planned night-time race at the Monster Energy MSA British Rallycross Championship round at Knockhill on May 12 won’t happen, so instead this third round of the Championship will be a day-time only event.

The event features a full programme of races for ‘Supercars’, the two-wheel drive Supernational class (including Junior Rallycross), the ferocious one-make Swift Sport Championship and the RX150 'off-road buggies'.

Commenting on the night race cancellation, the championship organisers Lydden Hill Motorsport Club (LHMC) commented: "We've run the Night race event very successfully at Blyton over the last two years. The planned move to Knockhill involved more equipment because the track is longer and we're now faced with taking a £10,000 loss on the event if we press ahead with the Night Race or breaking-even if we run it in daylight," said Clerk of the Course Willie Woods.

"To run at Knockhill needs 60 lighting towers (compared to 32 used at Blyton), originally this wasn't a problem and up until the end of last week I thought we'd got it covered but in the last few days it's become clear that we cannot secure enough lighting without paying full commercial rates and that means the event is not viable as a night race."

Reverting to a more usual daylight schedule, the event will now start with practice at 09.00 Hrs and racing from 11.00 Hrs on Saturday May 12.