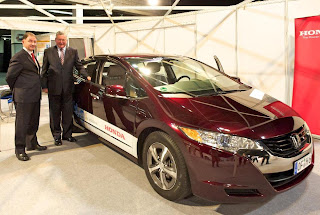 Just in case you hadn’t noticed, the World Hydrogen Technologies Conference was taking place in Glasgow this week at the SECC. The conference was opened on Wednesday by Fergus Ewing, who just happens to be Scotland's Minister of -- Energy, Enterprise and Tourism. An odd mix, but it must make some sort of sense in the corridors of power.

Anyway, there was another guest at the conference making its debut in Scotland, Honda's hydrogen powered car, the FCX Clarity.
It was a timely appearance to be sure. Our Government’s appetite for wind farms is matched only by our MSPs’ propensity for making wind inside the concrete Wendy house in Edinburgh. I can’t help thinking that a couple of strategically placed turbines in the debating chamber would do more to keep the lights on in Princes Street than the white-columned array at Carter Bar.
The trouble with wind is that it only generates electricity when it is blowing, whereas the Honda FCX Clarity’s electric motor is ‘fuelled’ by hydrogen which generates its electricity onboard through a 'fuel cell stack'. The stack creates electricity from a reaction between hydrogen and atmospheric oxygen. This reaction has only one emission, pure water which comes out of the tailpipe as vapour.

It also drives and handles like a petrol car and has a range of 288 miles while top speed is more than 100 mph. The hydrogen cell has another advantage over batteries, it can be refuelled in less than four minutes.
The big problem is infrastructure. In America and Japan, the infrastructure to support hydrogen-powered cars is already being developed, and Britain would need similar development. The big question is, would that be cheaper than installing rapid-charge electric power points in homes and car parks all over the UK?
Some of the industry bigwigs were promoting that very point this week in Glasgow – just don’t mention the trams!
Posted by John Fife at 05:03