I've said it before, I'll say it again now, and it won't be the last time either. I hate airports. I waited longer to get through the security gate than I did for a train and a bus to get to Glasgow Airport.

The queue for the gate disappeared out of sight when I joined it, and just when you think you're getting close, there's another barrier and another turn. Grrrrr!

Despite divesting myself of half my clothing I still set off the alarm as I walked through the arch. Considering I was clutching the waistband of my new jeans in one hand, and holding passport and ticket in the other, the only thing it could have been was my teeth fillings. So I got patted down by a very intimate bloke who then had a second go, this time with an electric squash racket. 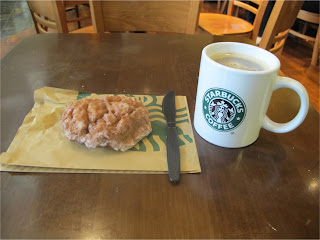 Then it was the nearest coffee shop to get rid of some cash. 2 quid for six squashed coffee beans and some hot water, and £1.60 for an apple fritter doughnut - it was apple, so it was justified as one of my five a day! That's my story and I'm sticking to it.

These experiences once again reinforced my long held belief that airports are simply designed to extract as much money as possible in as short a time as possible when people are at their most vulnerable. And you don't get much more vulnerable than standing in your stocking soles holding your trousers up.

Now it's off to Heathrow where for once I don't need to tramp for miles through soulless concrete, steel and glass cathedrals, erected to celebrate the joys of travel and the extraction of money for travellers everywhere. This time there is no changing terminals for flight connections, it's a shuttle bus to the NCP car park where my new Transit awaits.