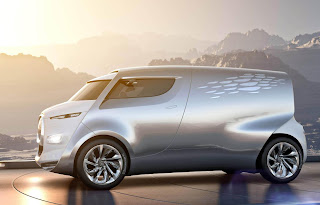 A plea to Citroën – please build it. The French company will be showing this Tubik, a 4WD, nine-seater concept at the Frankfurt Show in two weeks time and it just looks bluidy fabulous. If you squint your eyes you can just about see the lines of the original ‘air-raid shelter on wheels’ styled Type H or ‘TUB’ van with its corrugated panels first produced over 60 years ago in 1947.
It was as iconic in France as the split window Transporter, and over the 34 years of its production Citroën built and sold over half a million of them.
Powered by Citroën’s Hybrid4 technology the concept has a diesel engine driving the front wheels and an electric motor driving the rear.
The Tubik is 4.80m long, 2.08m wide and 2.05m tall, and can carry up to nine passengers, or fold the middle two rows down to make a van. But don’t be fooled by that exterior. It uses a special finish over the ‘side windows’ so that those inside can see out, but to those outside it looks like a solid paint finish.
Posted by John Fife at 17:47