Road - At Peace with the World

Stupid idea. After landing at Heathrow just before 6.00 pm, I thought I'd have a bite to eat before picking up the van and heading back towards God's country and let the London rush die down a bit. But despite all the tempting treats and aromas on display when you arrive at airport departure lounges, when you get off at the other end, there's nothing. Even in as modern a building as Terminal 5. Just two coffee bars and the pastries left over from upstairs. It's as if they want you off the premises as quick as possible.

Anyway, stopped to buy a bottle of Pepsi Max. Nearly choked. It was £1.79. The same size bottle at home is 39p. 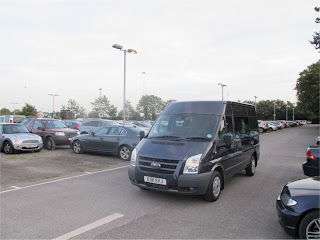 Headed for the shuttle bus stands and was soon on my way to the NCP car park.Great joy. Spotted the roof of the van poking up amongst all the car roofs around it. Got the keys, paid the £18 day-rate parking fee (and this was the cheap off-site car park! Shocking, eh), and asked for directions out of the place. They were wrong. Found myself heading for the M4 but knew where I was so stuck with it and picked up the A404 at Slough to join the M40.

The Government is thinking of raising the motorway speed limit to 80 mph, although no mention of changing CV speed limits I note. I really don't think that's a bad idea. Most folk in a hurry are doing that speed anyway but what I have noticed as I travel the highways and byways of Scotland and Englandshire is that the inside two lanes are busier than they were a couple of years back. This has less to do with rising car numbers and more to do with the cost of fuel.

The message has finally got through to most folks that higher speeds means higher fuel consumption. So folk are backing off and moving out of the overtaking lane, and setting off earlier.

From my vantage point high up in the Transit cab I can see over the hedges and read the motorway service station signs - £1.49.9p per litre of diesel. That's the bigest disincentive of all to go tearing up and down the motorways.
Posted by John Fife at 04:28