Road - Bruised by a Polo 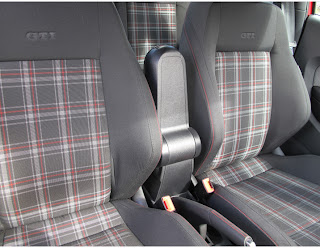 I did it again. I banged my funny bone, and it wasn’t funny. It’s all Volkswagen’s fault of course. They have this annoying knack of fitting a hinged armrest in the centre console. In the upright position it’s flush with the two seat backs and when it’s down it hinders access to the handbrake.

As usual, I jump in, fire it up, select first gear, get ready for the beans and then go for handbrake. Ouch! ya bugger, right on the bony part of my elbow. I did it again. I don’t know how many Volkswagens (and Audis) I’ve driven over the years with this infernal device, and I still forget. Every bleedin’ time.
I’ve given myself some right clatters in the past. And just you try explaining bruised elbows to the wife after you've been "out for a drive in the country!"
And yet, this time I forgive them. Because in this instance, the elbow basher is fitted to a Volkswagen Polo GTI. Smaller than a Golf GTI, this is no pocket rocket, it’s a teacup tornado!
Under the bonnet is a 1.4 litre 16 valve engine with a supercharger and a turbo. It spits out 178 bhp and revs to nearly 7000. It’s also fitted with a 6 speed DSG ‘box and paddles. According to VW it accelerates from nought to 60 in under 7 seconds.
But I’ll need to wait till it’s dark tonight.
Posted by John Fife at 01:00