Rally - Calm Before the Storm 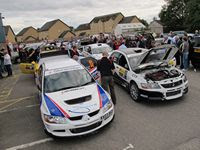 It wis a braw, bricht, sunless nicht in Elgin as the Scroots unpacked their bags, filled up their clipboards and got ready to greet the massed ranks of competitors lined up for the usual pre-event tyre kicking and wheel shoogling session ahead of tomorrow's Speyside Stages Rally.

Not lining up was Bruce McCombie. He had actually been taking part in the sponsors/media session earlier in the day but was forced to stop when the gearbox broke. The latest from Scrutineering is that he won't be able to repair the Subaru's 'box so he's out before he's started.

Colin Gemmell was a bit luckier. His Subaru's starter motor packed up between the Noise Test and Scrutineering, but the queue was so long that he had time to change it while stuck in the queue.

Phillip Morrow was looking pensive: "I haven't driven this car (his Lancer) on the loose before, only tarmac. It's got all the right suspension on it and I had a run out at the test day earlier today to try out the DMack Tyres. It was turning in alright and good on the brakes but the back end felt a wee bit loose so we've softened it up and we'll see how we go tomorrow," he said.

Robbie Head was equally pensive. He was at the est earlier in the day to try out is new Pirellis which he's running for the first time this year: "The stage was too short to get some heat into them so I didn't really learn anything. I'll find out tomorrow if they're any better than what I was using!" He's just back from a 5 day Enduro motorcycle event in Romania, the 'Red Bull Romaniacs' annual thrash up and over the mountains. It's an extreme motor cycling challenge fit only for the foolish or the foolhardy. At one downhill charge over the mountains there was a 12 foot step and he and his two mates stopped to look over it and wonder how they were going to get over this obstacle. Then a local rode up, stopped his bike, lifted it and dropped it over the edge, climbed down, got on and rode off. Robbie and the other two did likewise! Romaniacs is the right word.

Stewart Davidson's got a new motor, a MkII Escort and said: "I got it 3 months ago, stripped it and this will be its first event. I hope we get further than we did last year!" Referring to the very first spectator stage at Cooper Park in the centre of Elgin last year when he parked his Proton on top of a park bench. And they build their benches strong up here in Elgin with concrete bases. The Proton came off second best.

There are 8 Special Stages tomorrow, with the first two at Cooper Park, then it's into the forests for six of the best. If David Bogie wins tomorrow that will clinch this year's Scottish Championship title with two rounds to go. He's currently leading the British Championship as well and would dearly like to miss the final two rounds of the Scottish series to concentrate on his first British title, but: "The next round is the Merrick and that's my home event," he said, "and then the final round is the Colin McRae Forest Stages and I daren't miss that or The Bears will beat me up!" It's nice to be popular, eh?
Posted by John Fife at 05:30