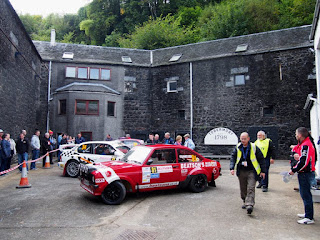 The year 2019 marks the 50th anniversary of the first Mull Rally. Much has changed during that half century, not just to the sport but to the island.


Thankfully, one constant is returning this year after something of a hiatus, the Beatson's Mull Rally, whereupon the town of Tobermory will assume the mantle of 'Britain's rallying capital' for one weekend once again. One might be forgiven for thinking that Chester, Harrogate or Llandudno could command such terminology. Nae chance. Mull is quite unique in world rallying, no other event comes close. This is a land of magic and mystery.

How do I know this? It all started in 1971 when a young man in a tweed cap was dispatched from his post at Shell & BP's Head Office in Glasgow to the Isle of Mull to investigate the phenomenon known as 'the Tour of Mull'. On his return he made a positive report to his Boss, one Bill Houston Esq, the Sales & Promotions Supervisor of the oil giant. As sponsors of the Shell Scottish Rally Championship at that time, Bill had it in mind to include the Mull event as part of the Scottish Championship, which it was for a couple of years. Even when it was excluded from the Scottish national series, Shell continued their association with the event.

That young man has rarely missed an event on the sainted isle since. Since then his maturity has been peppered with life learning experiences, unbelievable adventures and memory searing images. Standing with Chris Coburn on Tobermory Pier with a stash of White Horse Whisky miniatures (that's another story!) because the MacDonald Arms was bursting at the seams with rally folk. The only thing that could get near the bar was a spider walking across the ceiling. There were 12 miniatures to a box, but do you know something, the memory fails to recall how many boxes were consumed that evening. Funny that!

Another lesson learned was to ensure that a cigarette lighter's flame was turned down before lighting up a fag. Failure to do so might result in the smoker leaning forward, cupping his hand around the flame to light his cigarette, and failing to spot the tall flame shoot up and ignite the skip on his baseball hat. He was last seen wandering off into the night oblivious to his hat ablaze but no doubt impervious to the discomfort by the amount of drink swilling about his warm internals. Moral - baseball hats are dangerous, bunnets are far safer.

That young man was there too when a callow youth first sauntered on to the scene (1993?) in a Mk2 Escort which had only escaped the scrappie by being pushed past the gates at dead of night. Converted to a rally car, this self-prepared machine looked to have all the durability of a McDonald’s Happy Meal free toy, and yet Calum Duffy finished an incredible 10th overall. The rest is history.

And there is so much more, MacKinnon did the dozen, a record that will never be beaten? Then there are the names, McKnight and MacGillivray, Duffy and MacCrone, Cope and Harper, Beecoft and Biggerstaff, Hill and Coburn, Gemmell and Griffiths - the list is endless.

One memory burns bright above all others. Standing there under a cloudless, star-lit sky, the first silvery frost nip of winter burnishing the grass and tree tops and the cold seeping up through the feet on a banking overlooking Glen Aros. In the distance, multiple pairs of search lights pierced the darkness as they swept round corners and sky-lines in search of tarmac, accompanied by a distant piercing growl which grew ever louder. A tonne of metal burst into sight on the left, white hot exhaust glowing on the tarmac underneath, red hot brake discs showing through the blur of spinning wheels and shot past like an Exocet looking for trouble, trailing a twinkling cloud of cindered brake dust and sumpguard sparks, the ears assaulted by the mechanical cacophany of the devil's orchestra. Once seen, heard and smelled and never forgotten.

Guess where that once young man will be in two weeks' time.