As Scrutineering for the Armstrong Galloway Hills Rally closed for the night, there was a last minute flurry of activity in the service area. John Wink had signed-on and the Hyundai i20 R5 had passed the Noise Check and gone through Scrutineering, but as John drove the car out of the Scrutineering Bay the engine started to splutter. Turns out that three of the four ‘lift’ pumps in the fuel tank had conked out. Not just one, but three of the rascals. With the rally start less than 12 hours away, the crew set to it hoping that repairs would be effected in time to start the event. Also in last minute trouble was Paul McErlean, the Northern Irishman had also successfully negotiated the pre-event technical checks and paperwork and was on his way back to his overnight digs when the cylinder head gasket in his Ford Escort Mk2 failed. So that’s another crew facing an overnight repair job. 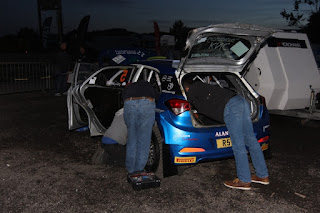 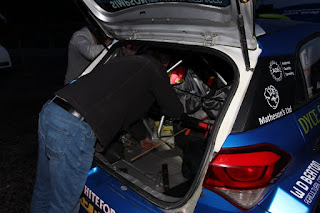