No surprises here. David Bogie and John Rowan fired up the German sausage tin and simply disappeared over the horizon to take a final end of season forest rally win in Scotland on yesterday's Armstrong Galloway Hills Rally. A lack of familiarity with the MINI WRC was no hindrance, but the worry is, he reckons there's more to come.

The Subaru was showing its age as Jock Armstrong and Cameron Fair gave valiant, but ultimately fruitless chase, and there's a new threat in town, the fast improving Michael Binnie and Claire Mole were third overall in the Evo9. It would appear from this year's performances that when Michael is having a tough time on the farm, he takes it out on the rally car. He was 4th and leading Lancer last month having been levered out of the combine harvester to do the Grampian, and had just finished the harvest on Friday before being whisked across to Dalbeattie for 'the Hills' where again he was top Lancer.

Having given the Hyundai a run out on the Tyneside, Stephen Petch was back in more familiar surroundings yesterday with the Fiesta WRC finishing 4th ahead of Rory Young, who had struggled with set-up in the R5, while Scott Beattie again impressed the old hands with 6th place in the Lancer.

John Wink was in the top six till the third stage till an over-ambitious 'cut' in the third test sheared the tops off the bolts securing the Hyundai's front strut. Andrew Gallacher was out too with strut trouble striking a rock in Dalbeattie's long grass with the Fiesta. 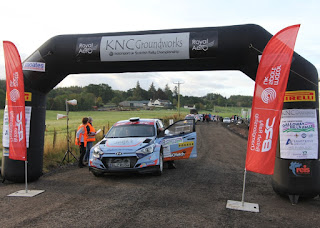 In the final round of the British Championship contesting the longer 75 mile version of the Armstrong Galloway Hills Tom Cave did all he could do to try and wrest the British crown from Matt Edwards. Matt only needed a top 7 finish to retain his British title. He finished third overall while Tom took the rally victory. Sandwiched between the two was Jonathan Greer.

On paper the two event in one format looked quite ingenious, and indeed quite practical, but on the day the schedule was scuppered by thoughtless spectators, or perhaps equally worrying, some who didn't know any better. Although the BRC squad got away on time at 08.00 Hrs in the morning, the Scottish event start was delayed by some 40 minutes and there was a further big delay later on.

The saving grace was the quality of the stages and the fair weather. Certainly a long day out in the woods, but an enjoyable one.

There will be a full report and pics from both events in Wednesday's 'Motorsport News' and that will be followed by the usual longer report in the on-line mag.