The CCS Rally Team are collecting for the Children’s Charity appeal at the Armstrong Galloway Hills Rally so if you see a yellow bucket tomorrow, put some cash in it. Mind you, I did have some concerns when I saw the CCS Chief Exec approaching in the team support Transit and thrusting a bucket in the face of all and sundry as he drove past. It occurred to me that questions may be raised about which Children’s Charity will be the recipient of such public generosity since the Boss of CCS has a ‘child’ who is contesting the rally, one Caroline Carslaw in the Ford Fiesta, and since she is in fact Donald’s daughter, aka ‘child’ there was a suspicion that the rally team will be the principal beneficiary of the ‘children’s charity‘, but fear ye not. It is all above board and it is indeed the annual STV Children’s Charity which will benefit and every penny and pound will be put to good use. In fact, Donald Carslaw has been a long time supporter of this most worthwhile cause. So please donate, it really is for the weans. 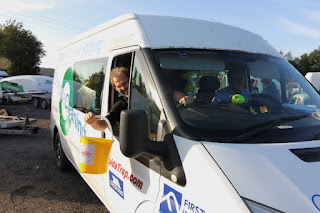