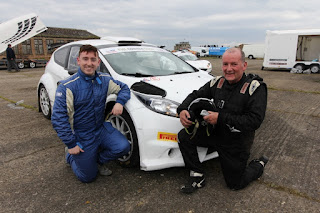 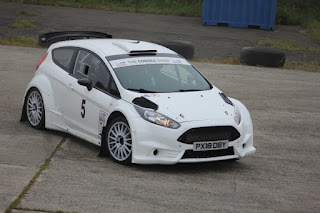 John Rintoul was back in his winning ways with victory on today’s UK Rally Scene Summer Stages Rally at Crail. Coincidentally, it was here at Crail that he scored his last victory – in 2015! Rintoul and co-driver Ross Hynd put their ‘wilderness years’ to rest with a commanding display, leading from first stage to last and first time out in the new car.

Glenrothes MSC must also be praised for the work they had put into this year’s event with more tyres and bales than a tyre manufacturing farmer. Naturally their efforts were completely disregarded by most of the drivers who sought to re-arrange the stage furniture in violent fashion throughout the day.

Some tried to blame the North Sea haar which shrouded the old airfield as crews gathered in the morning. The mist rolled and swirled about during the first couple of stages before the sun (as it was!) managed to ‘burn’ it off. But this was Crail, even in full sun, it wis still cauld!

Colin Gemmell and Pete McCallum finished second overall in the Mk2 and there was an Inglis in 3rd place, but not Alistair. Young Greg and Colin Harkness finished a fine third in the Lotus Exige, although one did feel a bit sorry for Colin, having to sprachle in and out of a car little bigger than a Tupperware sandwich box, and at his age too! 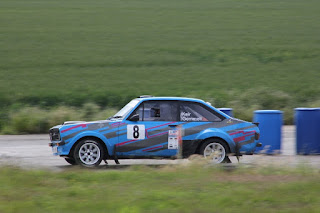 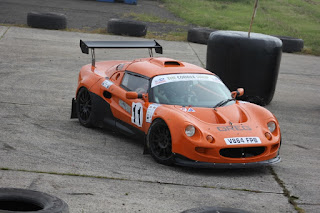 Andrew Kirkaldy had a recurrence of his fuel pressure problems and was forced out, Alistair Inglis reversed unintentionally (and at speed) into a tyre marker which broke his Lotus’ exhaust manifold and rear mounted silencer pipe and box, John Marshall knocked a wheel off the Subaru against a tyre marker and Brian Watson stalled at the ‘Do’Nut’ and the beast (the Subaru that is, not The Sheriff himself) refused to re-start.

Everyone else, including the winner, finished the rally with battle scars along the flanks and a few dents in the armour. It had been a hard and fast affair right enough.

Alan Gardiner scored a fine fourth in the Mk1 just 10 seconds ahead of Richard Sutherland’s Manta which spent so much time going sideyways that folk were concerned that Crail airfield wasn’t wide enough to contain it. Rounding off the top half dozen was Andy Horne, and he’ll be one to watch in the future. This was just his second outing in the Darrian.

Kyle Adam took a hard fought 1600 class win in his Mk2 from Des Campbell in the Peugeot and Stephen Hay in the Corsa who finished 11th o/a while Stephen Bethwaite took the 1400 class when all his rivals wilted along the way.

(Note: Full report later in the week in the on-line mag)
Posted by John Fife at 21:30