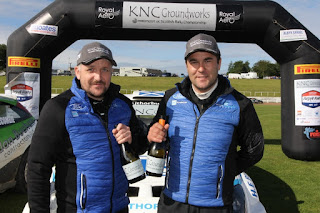 Sun, sea, stoor - and midges. It could be only one place, Cowal. Fortunately, an intermittent breeze kept the midges at bay, most of the time, allowing us to enjoy the thrills and drama of the Dunoon presents Argyll Rally.

Two guys enjoyed it more than most, the winners, Euan Thorburn and Paul Beaton, but Garry Pearson and Dale Bowen were an ever present threat. 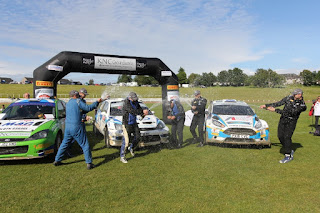 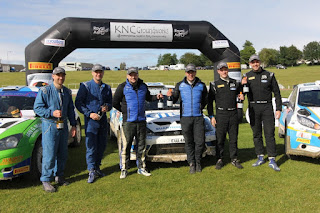 The difference was almost a minute by the end of the 6th stage. This time it was Pearson who appeared with a punctured tyre in the Fiesta R5! That was too much to take back with just two stages remaining, so the top two positions were now settled.

Despite continuing stalling problems with his Focus – “I’m still not sure if it’s me or the car” - Bruce McCombie finished 3rd ahead of Michael Binnie who had spent day welding metal to a front bottom arm which had been bent when he punctured a tyre in the Lancer.

In an excellent 5th place was the ever improving Thomas Gray who had also punctured a tyre and bent a bottom arm in his Lancer. Rounding off the top six was John Wink who had a miserable day with the Hyundai. An intermittent electrical fault was switching the car from 2WD to 4WD whenever it decided - without first consulting John. The fault was eventually traced to the rear differential clutch which cuts drive to the rear wheels when the handbrake is applied, but there was no fix.

Top 2WD runner was Iain Wilson in 8th place overall with his Mk2 while first time out in his new Mk2 was a knackered wee boy called Mark McCulloch. He finished 10th but the car has no power steering – and Argyll is just full of corners.

Top 1600 runner was Jude MacDonald in the Skoda R2 beating the rapid and experienced Barry Lindsay in his Peugeot by 8 seconds. A marvellous result for the youngster considering the pace and experience of Barry, although Barry did have a puncture on the first stage. Angus Lawrie might have troubled both of them with the pace of his C2, till he parked it in a ditch in SS3.

Scott Peacock was top 1400 runner, a task made easier when Niall Cowan Jnr retired. And the cause? Put it this way, he’ll need an awfy big magnet to find all the bits after a rod made a bid for freedom through the block.

Full report in Wednesday’s ‘Motorsport News’ and the usual longer report in the online mag later in the week.