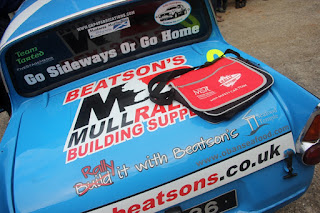 29 years ago, the biggest revolution to hit British stage rallying took place on a 300 sq mile sea scrubbed, sun-soaked, rain washed rockery just off the west coast of Scotland. Although closed road rallying was popular in mainland Europe, Eire, Northern Ireland and the Isle of Man, 'mainland' Britain had yet to be persuaded.

Fortunately, 50 years ago one man set the wheel in motion. Captivated by the scenery and inspired by the roads, he had the vision and determination to introduce a novel addition to Great Britain's motor sporting heritage. The original Tour of Mull Rally proved such a success and generated such an enthusiastic following that this same man was encouraged to consider the prospect of 'closed public roads' for competition. In 1990, three years of painstaking persistence paid off and the first 'closed public road' rally on the UK 'mainland' took place in 1990. Thanks Brian.

We can all celebrate Brian Molyneux's foresight and hard work in October later this year. The new organising team behind the 2019 Beatson's Mull Rally have revealed details of the route for this year's event scheduled to run on the 11-13 October. The entry list is due to open on August 2nd and given the level of interest, is expected to close with a full entry, plus reserves, on August 3rd!