Rally - Cars of the future? 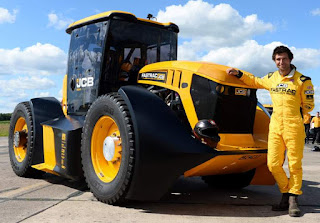 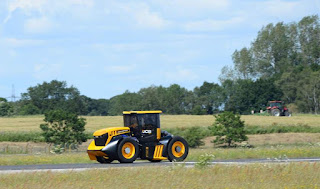 Could this be Williams F1 new secret weapon for Formula 1 success? Given recent tactics employed by some 'professional' racing drivers - who would try and undercut, outbrake or wall squeeze this?

Spotted at Elvington Airfield in Yorkshire  was one Guy Martin Esq who was intent on  beating the current holder of 'fastest tractor' set by Top Gear last year. Their Track-tor set a record breaking speed of 87.27 mph. Guy smashed it with JCB's Fastrac machine establishing a new British record of 103.6mph.

Apparently it was Lord Bamford's own idea and he set the JCB engineering team to work on the task and employed the services of the Williams F1 team to help with the aerodynamics. In 2006, the JCB DieselMax streamliner set a new diesel land speed record of 350.092mph on Bonneville Salt Flats in the USA, using two JCB DieselMax engines. A record which still stands.

Based on the JCB Fastrac farm tractor, the record-breaking tractor is powered by JCB’s 7.2 litre, 6-cylinder DieselMax engine produced at its Derbyshire factory.  Capable of delivering 1,000hp and 2,500Nm of torque, the Fastrac had been put on a diet with Williams Advanced Engineering responsible for the aerodynamics.

Guy Martin said: “It had been a great day with the JCB at Elvington, proper job with some right proper engineers. She felt rock steady on the runway, job’s a peach.”

On the other hand, Jock Armstrong is without a car for this weekend's Dunoon presents Argyll Rally. Jock of course is no stranger to agricultural machines. This past week he has been spotted at the wheel of a digger in New Galloway laying new pavements in the town! I reckon Jock could do a 'proper job' in the Argyll forests too, eh? 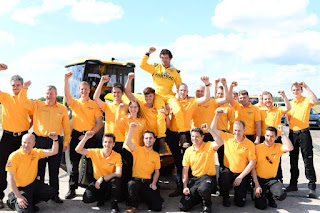