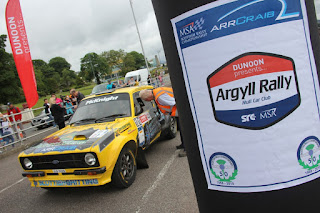 The older one gets the stronger the sense of deja vu that is experienced when travelling to the lesser frequented parts of the country. The trip down to Machrihanish each year sends shivers down the spine, but easily explained. That was part of my 'patch' on my very first job leaving school (last century!) and the place names have a ghostly familiarity to them.

It's the same with Dunoon and the Cowal Peninsula, not just memories of the job, but memories of forest rallies attended back in the day when rallies were adventures in time and endurance, speed and control, not to mention accuracy in route plotting and timekeeping!

45 years ago, the Dunoon based Burmah Rally, a counter in three main championships - the 'International' RAC, Castrol/Autosport National and our own Scottish - was memorable for another reason. There was quite a stramash back at the finish. The fastest man through the stages didn't win, nor did the second fastest man finish runner-up. Nope, it was the third placed crew who scored their first National Rally victory. In total, 22 crews incurred a time penalty. The top seeds suffered because they were hanging back at the start of some tests either to let others run first in muddy and streaming wet conditions or to see what times rivals were setting. That was because there was a 30 minute penalty free lateness allowance at Stage Arrival Controls - EXCEPT for the Final Control at the rally finish. Oops!

Roger Clark was docked 16 minutes and Billy Coleman 20, with the result that Tony Pond and Mike Broad scored a remarkable first National victory in their 158 bhp Opel Ascona. Paul Faulkner therefore finished 2nd and George Hill 3rd. James Rae was 4th and Andrew Cowan 5th with a certain class winning Jim McRae on only his fourth ever rally in 8th place overall. Also, 9th equal were Alastair Findlay and Murray Grierson. In fact Grierson's performance was remarkable too, he had been seeded at number 113 and spent the day overtaking cars like it was a motor race!

And another thing, Ian Gemmell was 2nd Group1 car home in his Chrysler Avenger behind the works supported machine of Robin Eyre-Maunsell.

There was yet more Scottish success when the Team Prize was awarded to the 3 car 'Team Frew' of James Rae, Arthur Jasper and one Ian Milne Esq - the only one of those mentioned who will be in action in Dunoon this weekend. He must have lied about his age when he passed his driving test, eh?

Amongst the 15 stages that day were Glen Shellish, Inverliever, Knapdale, Minard, High Kilmun, Corlarach and of course, the Rest & Be Thankful - 64 miles of some of the most demanding and challenging forestry roads in the UK, not to mention the tarmac hairpin at the top of 'the Rest' with its fresh air drop over the edge into the deep, dark unknown. Good job it was dark when the rally crews got there.

Things will be a bit different this year, but no less competitive. For a start, the 2WD brigade will start at the front and benefit from the better surface. Will that be enough to give them a real advantage over the heavy mob behind? There's only one way to find out. If you can't make it to Argyll, there will be a report in next Wednesday's 'Motorsport News' and the usual colourful and detailed roundup in the on-line mag later next week.