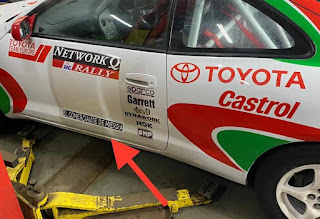 Now, as you know, or maybe you don't, Coltness Car Club and its members take a rather different view to most things than normal folks, especially rallying. For instance, club member Craig Ritchie was ever so slightly miffed that as the reigning McRae Rally Challenge Champion he was seeded last in the entry list at the weekend.

That of course needs a little explanation. Craig did indeed win the last event at Knockhill in 2015, but as co-driver to Alister McRae. So technically, he is correct, he was a reigning champion.

However, he entered this year's event as a driver, but given his limited experience as a driver (this would be his first stage event!) he was indeed running at the tail end of the field. 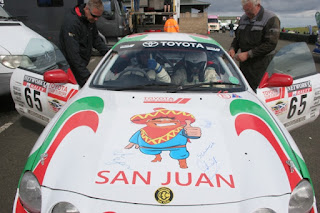 Of course, he was well aware of all this but he was playing it up amongst his pals and fellow club members.

Now it just so happens that the chaps at Larkhall Autopoint who helped prep and paint the car are CCC members too and they played a merry little jape on Craig which has remained undiscovered - till now.

The livery on Craig's Toyota was absolutely authentic, but for the addition of a sticker along the bottom of each 'Network Q' door panel.

In a nod to Craig's Mexican bandit heritage (that's another story) the 'additional' sticker was written in Spanish, but either Craig has forgotten all his Spanish vocabulary or he just didn't really notice, but the legend "el comerciante de mierda" is less than flattering and this adorned the flanks of the car throughout last weekend, and I don't think anyone else even noticed, and that included Luis Moya!

Have you worked it out yet? Literally translated it means 'bullshit merchant'!

But Craig had the last laugh. He took part whilst others just stood and watched. And the best bit? He may have started last, but he didn't finish last.

However, the moral of this story is, be careful who you insult in Coltness Car Club, the Bears always bite back. 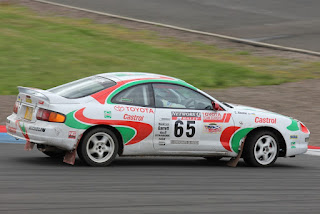 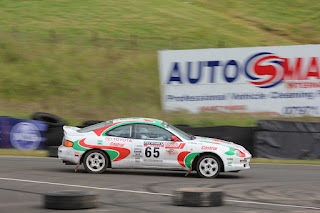