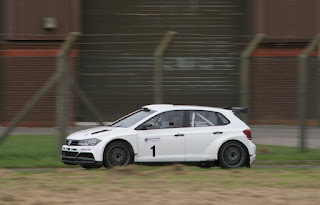 Well, that was a belter. There were points to be had in the Burnside Piling Scottish Tarmack Rally Championship and the Ecosse Junior Rally Championship at the weekend on the two-day Mach1 Stages at Machrihanish in sunny (and sometimes dampish and foggyish) Argyll - at least there were nae midges, like Dunoon! However, one had to finish to score points!

Derek McGarrity said this is the best single venue rally he's done and he reckons more of his compadres should venture over the water next year. And maybe not, because for a wee while it looked very much like a Northern Irish 1,2,3, at the top of the results sheets. However, that was partly due to the number of Scottish top seeds missing from the entry list for one reason or another. 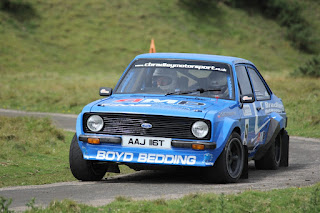 Upholding Scottish honours was the Lotus Exige of Greg Inglis and  Ian Parker doing its damndest to fend off the Hyundai i20 of Michael McGarrity and Damian Garvey. Greg must have thought he was home and dry when Michael did an extra lap on SS9 and dropped to 6th place, but then the Lotus Exige snapped a driveshaft on the very next stage.

John Bradley and Ryan Crozier ensured a NI one-two in their Ford Escort Mk2 but Andy and Karen Horne in the Darrian T90 kept all other furriners at bay.

And the best fecht of the day? The two wee Citroen C2s of Jamie Miller and David McIntyre. David had a 20 second lead on Sunday morning but by Sunday afternoon, Jamie had a one second lead! Marvellous. The Rover Metro of Innes Mochrie scored the Class 1 lead after Andrew Blackwood's Fiesta broke its gearbox. 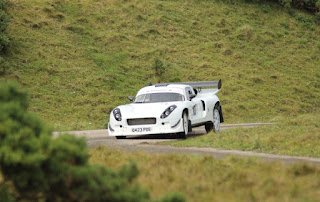 Having driven 450 miles from the English midlands, Andrew Fraser's Darrian didn't get far. It backfired on SS2 and set fire to the air filter and plug leads! Colin Gemmell's VW Golf R7 was reduced to FWD when the rear differential "wouldn't talk to the front diff" so it's back to the workshop. Tom Blackwood broke a hub in the Escort Cosworth.

There was no doubt about the winners, though, Derek and Graham Henderson romped home some six minutes clear of the rest of the field over 97 miles of stages.

The Juniors had a rerr terr as well with 12 stages totalling 47 miles of stages on the Saturday only. Sam Pattison scored the win over Kalum Graffin and Rian Walker although Oliver Phillips might have made it a four way fight had it not been for a wee mistake when he bent a bottom arm and the steering rack.

There will be a report and photo in 'Motorsport News' on Thursday and a full report in the on-line mag later in the week.