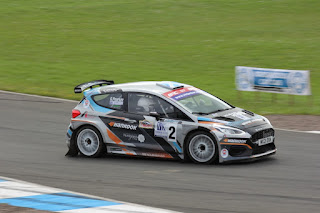 Prior to the event at Knockhill at the weekend quite a few drivers were saying it wasn't about the competition, they were going just to put on a show for the spectators. Aye, right, once the stage start clock started counting down and the wee green light flickered on, all thoughts of fun and frolics went out the window!

Showing their hooligan side were the likes of Barry Groundwater, Angus Lawrie, Tom Blackwood, Kenny Blair, and others, as well as visitors Carlo Boroli and Oliver Benton, proving there's no smoke without tyres.

With a 25 second gap to second place it looks on paper as though Garry Pearson and Ross Kirk had an easy time of it, but for the duration of ten stages, Garry couldn't relax as there was a Hyundai filling the Fiesta's mirrors pretty regularly throughout the two days. However, runners-up Andy Scott and Laura Connell didn't have an easy time of it either with the Fiesta of Joe Cunningham and Josh Beer only three seconds behind at the finish. 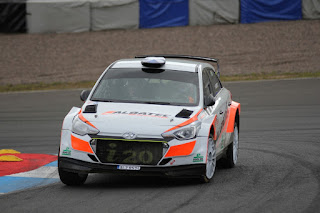 After a cautious start, first time out in the Fiesta Rally2, Finlay Retson was quickly on the pace with Rhys Stoneman and overhauled Gordon Morrison and Hannah Mckillop to snatch fourth in the closing stages.

In fact 21 seconds covered 2nd place to 7th, that's how close it was with Ian Forgan and Chris Lees scoring a magnificent sixth first time out after that horrific accident on the Snowman. They pipped young Max McRae and Macartan Kierans (Arthur's lad) by just one second.

The boyish good looks of Jonny Milner is now topped with white but he and Colin Duncan McMath put on quite a show in the Corolla WRC with John Marshall and Craig Wallace showboating their way to ninth in the Fiesta just ahead of John Wink and Neil Shanks in the Hyundai. 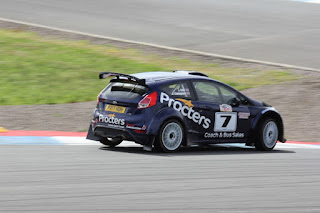 Alister McRae and Ian Grindrod lost out when the Hyundai needed a coil pack and Mark McCulloch was in for a top result until a power steering pipe burst.

Gwyndaf Evans and Phil Mills won the Historic class in the Mk2 ahead of Wayne Sisson and Aaron McLure's Mitsubishi Galant. In third place was one James S McRae Esq giving it laldy in the Stobart Escort. Steve Bannister lost out with a broken distributor. Sam Pattison was top Junior 1000 in his Skoda ahead of Kalum Graffin and Jack Ryan - more on them later too.

There will be a full one page report in Thursday's 'Motorsport News' and that will be followed up by a more extensive  report on the weekend's activities in a certain on-line mag!