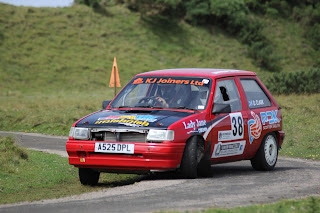 At the end of Day 1 of this year’s Mach1 Stages, Derek McGarrity leads in his VW Polo. Greg Inglis is 2nd in the Lotus with Michael McGarrity in 3rd place in his Hyundai i20. John Bradley is 4th in the Escort Mk2 ahead of Andy Horne in the Darrian with Michael Harbour rounding off the top six in his Escort.

Tom  Blackwood has broken  a hub in his Ford Escort Cosworth and Jamie MacLean has broken his Vauxhall Nova’s rotor arm. Mind you I’m surprised it’s only the rotor arm he’s broken. He’s driving the poor wee Nova like it’s a Mk2 Escort! Somebody needs to tell him it’s FWD.

Andy Fraser’s rally didn’t last long. Haven driven 450 miles from Tamworth, he was out in SS2. The Darrian backfired and set the air filter alight and melted the plug leads and rocker cover, but fortunately nothing else was damaged in the small fire. There was another fire too, in Jim McDowall’s Escort when Shona’s co-driver’s bag caught alight. It was just the heat from the floor that caused it but the real disaster was her Toffee Crisp melted! Colin Gemmell started well in his new Golf but had problems with his front diff talking to his rear diff so disconnected the prop shaft and is running in FWD mode.

After yesterday’s rain and see haar enveloping Machrihanish, today dawned much brighter with the sun eventually making an appearance and turned into a grand day.

It was also a grand day for the Junior 1000 runners. They got 12 stages, 8 short and 4 awfy long ones, in their 47 miles of competition. Sam Pattison won from Kalum Graffin and Rian Walker. Oliver Phillips was setting competitive times but bent a bottom arm and steering with an off in SS6.

The Juniors are now off home whilst the ‘seniors’ have another four stages tomorrow.