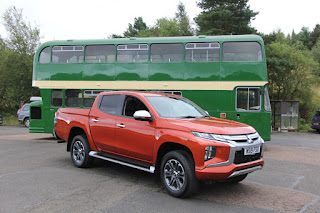 Mitsubishi brought its new L200 pickup to Scotland yesterday for the Scottish and Northern Irish motoring journalists to try out. Based at Knockhill, Mitsubishi had arranged a few added extras - a handling course on the loose, an autotest with a loaded three axle trailer, and a session on the Knockhill off-road course which packs an awfy lot of terrain into its compact surroundings. 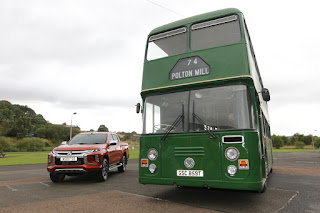 There was however, one journalist who deviated from the later road route to visit the nearby Scottish Vintage Bus Museum, which is open only on Sundays during the 'Summer season' (and well worth a visit), but there were no buses parked outside on the apron for a photograph. The lads (maybe the term 'lads' is a bit misleading as these are all retired volunteers with grey hair and even greyer moustaches) are a really nice bunch and they said 'just hold on a minute' whereupon one of them dived into the garage fired up a bus and brought it outside. A magnificent fully restored 1978/79 Daimler Fleetline with its 6 cylinder, ten and a half litre 180 Gardner engine purring like a gruff tiger. Magic, pure magic.

Then the guys wanted to look over the pickup and they were just as impressed as me. By the time we were finished I was nearly late back to Knockhill with the pickup! There will be a full appraisal of the pickup in the on-line mag shortly.

By the way, the next 'event' at the Museum will be the Pre '67 Ford Owners Rally on Sunday 1st September. So if you're not at the Bo'ness Revival, and you're an old car or old Ford fan, then why not pop along for a nosey. As I said, they are a great bunch of lads.