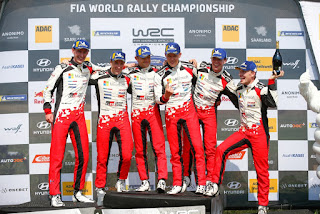 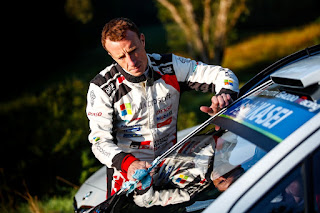 No doubt there were quite a few 'home folks' on  the edge of their seats on Sunday just waiting for disaster to befall. It didn't, and Kris Meeke and Seb Marshall scored a magnificent runner-up place on Rally Germany 20 seconds behind Toyota Gazoo team leader Ott Tänak and Martin Järveoja.

With Jari-Matti Latvala and Miikka Anttila in third place it provided Toyota with their first clean sweep of all podium places since the 1993 Safari Rally, although they actually had four Celica Turbos in the top 4 places that year. Incidentally that result coincided with a certain Colin McRae's Safari debut in, of all things, a supercharged 600cc Subaru Vivio. He didn't finish. The poor wee thing broke its suspension, on the first stage!

At Rally Germany finish, Kris commented: “I’m delighted. I could have had four or five, maybe six podiums already this year, and through different issues and my own mistakes, we never got there. To be on the podium and to bring a big haul of points to Toyota with a perfect score, a 1-2-3, it’s special to be part of this weekend. To take maximum points for the manufacturers’ championship is really important. I felt good in the Yaris all weekend, it gave me great confidence, and I definitely was able to drive at a good speed and be comfortable.” 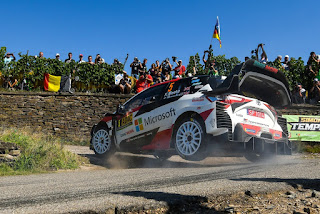 It wasn't all plain sailing though, Tänak had a bit of a problem with his brakes problems to the extent that he had to back off on the closing Wolf Power Stage. Although he lost out on extra points, he had enough of a margin to keep Kris Meeke at bay by 20.8sec with Latvala a further 15.2sec behind.

Thierry Neuville was having quite a battle with Tänak early on, but having to stop and change a punctured tyre dropped him out of contention for the lead.

In fact three Hyundais filled the next three places with Dani Sordo initially 4th, but sacrificed his position by incurring a penalty which allowed team-mate Neuville to move up from 5th and collect more WRC points.

There were more team tactics behind. Esapekka Lappi was 6th, but adopted the same strategy as Sordo to enable Citroën C3 team leader Sébastien Ogier to climb from eighth to seventh. Lappi dropped two places and Andreas Mikkelsen also profited as he inherited sixth.

Ogier and Lappi both struggled with major understeer and world champion Ogier now trails Tänak by 40 points and Neuville by seven.

As for M-Sport Ford it was another weekend to forget. Teemu Suninen lost time on the very first stage of the rally when the Fiesta was halted by a broken wire in the engine bay. Gus Greensmith fared little better having to change a steering arm on his Fiesta. On a more encouraging note both cars were setting competitive times when they were running after their problems.

(Thanks to Toyota Gazoo for the pics) 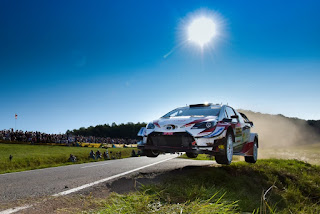 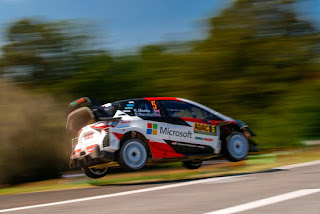 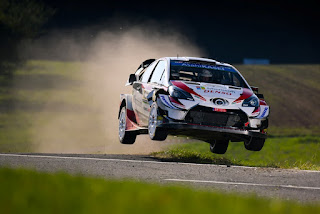