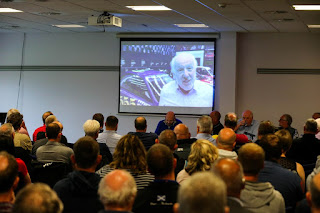 Apparently some folk doubted my head counting (fair point!) skills at yesterday's meeting in Stirling where I claimed a figure in excess of 130 folk attending.

Thankfully, one Eddie Kelly Esq (MacApparazzi in Chief) was in attendance complete with camera. He also has a fish-eye lens (I can't even afford a fish finger) and was able to capture for posterity an image of the whole room.

These photos were actually taken before the meeting got underway, but when it did all 100 chairs were occupied including latecomers - you know who you are Doc! - some additional chairs brought in (purloined from an adjoining meeting room) and there were folk standing at the back and sitting at the sides, so I stand by my figure of 'nearly' in excess of 130 folk. Perhaps I shouldn't have included David Richards who had sent a video taped message which was broadcast to the delegates to open proceedings. He was there in spirit if not in person.

A goodly figure you might think, but here's another thought. If there are just over 1000 active rally competition licence holders in Scotland why did less than 50 of them turn up to a meeting headlined 'Save Scottish Rallying'? For sure, many sent in apologies along with their thoughts and opinions, but is a 5% response good enough, or is that par for the course these days? 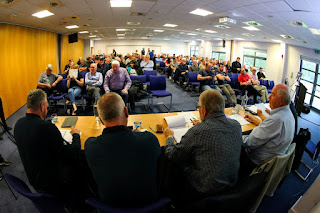 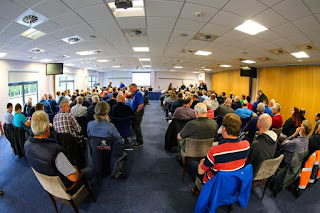