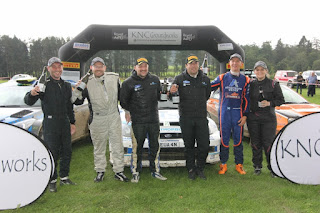 Scotland has a new rally champion, or perhaps not quite so new, it’s his third national title! Euan Thorburn and Paul Beaton won today’s Grampian Forest Rally and with one round to go in this year’s KNC Groundworks Scottish Championship, he has done enough to put the title beyond reach of the pursuit.

A finish inside the top nine might well have done it so the choice was to go for a win or go for a finish. After two stages, Jock Armstrong and Kirsty Riddick were leading in the Subaru Impreza, but a 14 second faster time through the 3rd stage at Drumtochty put the Ford Focus WRC crew into the lead by 3 seconds. A lead which was extended to 27 seconds by the rally finish.

Completing the podium line-up were a delighted John Wink and Neil Shanks in the Hyundai i20 R5. Michael Binnie was 4th and Scott Beattie 5th first time out in the ex-Fred Milne Mitsubishi. Thomas Gray was 6th in another Lancer despite a puncture in the first stage of the day.

Bruce McCombie was on course for a top 3 finish till the Focus WRC indulged itself with a sideways somersault in the final stage. It landed back on its wheels and the crew drove on to finish just outside the top ten.

Iain Wilson was top 2WD in 10th place with the Escort Mk2 while arch rival Mark McCulloch broke a half shaft in his Mk2.

Donnie MacDonald was another to lose out, although he did finish. Lying 4th overall at the half way point, the Fiesta R5 driver dropped 7 minutes in the next stage at Durris with an unplanned botanical foray, John McClory retired his Lancer with a centre diff problem and Marty Scott put his Lancer off the road in Fetteresso.

Folk were fearing the worst as they opened curtains this morning and could see – almost nothing. Thick mist cloaked the north east and the forests, with no sunshine to ‘burn’ it off. At least it was better than the day before when rain lashed the area and threatened to turn the service park into a wee loch. The first cars encountered patches of thick mist but also found that the stages were in remarkably good order although a bit slimy and slippery under the trees. And then the sun came out. It was almost like Summer.

At the finish, Euan praised the stages and added: “That was a relief. It was a difficult position to be in this morning. Whether to go hard or sit back, but the stages were good. This has been a hard-to-beat season (with his BTRDA Championship victory), my first Scottish title was the best, but this was equally as good.