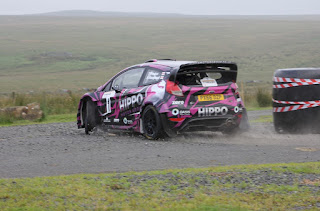 Despite the pre-rally ominous weather predictions, warm sunshine and a sticky, muggy air greeted competitors at the weekend's Glendinnings of Prudhoe Tyneside Stages Rally. There was  a brief heavy shower mid afternoon but the roads dried remarkably quickly in the heat, then came the downpour with the rain fair stoatin' off the tarmac on the final two stages. 'Slick' stages were instantly transformed to 'full wet' while the sudden-ness caught out quite a few crews already on their way out to the final blast. 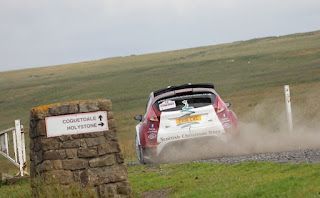 Whether it was divine intervention or just plain black magic Tom Preston and Andrew Roughead were one of the few top seeds who left final service in a wet-shod Fiesta WRC. It might have been a bit of a gamble on the penultimate test but when the heavens opened on the final run that was the job signed, sealed and delivered. They finished 12 seconds clear of Rory Young and Allan Cathers in their Fiesta R5.

A further 14 seconds back were Daniel Harper and Chris Campbell in the wicked looking MINI WRC, with sweat pouring off Daniel like rain water off the car as he tried to get on terms with the top two on the final runs. 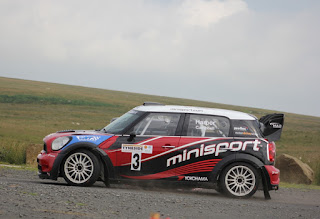 Gordon Morrison finished a lucky fourth in his Subaru Impreza after knocking a chunk out of an alloy and yet the tyre had stayed intact. Graham Coffey was 5th as he struggled to get to terms with the launch control on his new Fiesta R5 and Andy Fenwick rounded off the top six first time out in his new Fiesta R5.

As for 'Drive of the Day' that must surely have gone to the only 2WD car in the top ten. Alistair Hutchinson finished 7th overall in the Renault Clio, a feat matched only by the class winning 1600cc Peugeot of Barry Lindsay who finished just outside the top ten in 11th place.

Paul Kirtley was 8th in the Subaru which bore a few close-combat battles scars by end of play and John Marshall was a cautious and careful 9th first time out in his new Fiesta R5. Rounding off the top ten was the Evo of Richard Slinger.

Over the opening stages, Andrew Kirkaldy's Mk2 looked like some wayward MOD armament as it blasted over the Ranges but an off-line moment in SS4 incurred a bent rear axle when the wheel hit a stone in the long grass. Kevin Proctor didn't last much longer when the Fiesta broke its input shaft, Alistair Inglis broke a driveshaft in his Lotus Exige, Phil Jobson had a scary brake failure in his Mk2 and Stephen Petch was on course for a top ten finish till he hit a patch of wet concrete in the final stage and the Hyundai WRC slid into a ditch.

Stephen Bethwaite took the 1400 class in his Vauxhall Nova from the 'real' Mini Cooper S of John Cressey.