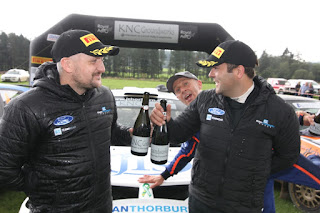 Euan Thorburn and Paul Beaton are the 2019 KNC Groundworks Scottish Rally Champions after winning last weekend's very wet, dry-ish, very wet Grampian Forest Rally. It's their third Scottish title. Jock Armstrong and Kirsty Riddick finished second overall to the rally winners while a tremendous scrap for third place was resolved on the last stage in favour of John Wink and Neil Shanks. Bruce McCombie was on the boil - till he wasn't, and Donnie MacDonald was in the hunt too, till he found a wee ditch. The full story is here, and only here, in Scotland's on-line rally magazine: