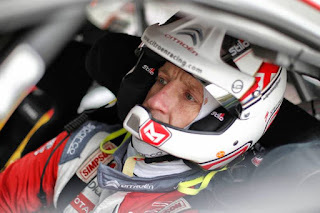 Snow, snow, let there be snow ... With 8 stages cancelled and many of the others under threat, Rally Sweden finally got underway yesterday with a six stage route, but conditions were mild, very mild.

As expected, the VW team were off and running with Sebastien Ogier setting the pace. Then Jari-Matti Latvala had a front driveshaft failure on the second stage and suspension failure on the last stage of the day. Also in trouble was Andreas Mikkelsen who slid off the road on the fourth test and later damaged the nose of his Polo, but he's still running.

That should have been good news for the Abu Dhabi Total WRT squad with Kris Meeke moving up to third place by the end of the first loop in his DS3. In the afternoon, when a significant amount of snow finally began to fall, Kris increased his pace to take the stage win on Svullrya 2. Having moved into second position and within striking distance of Sébastien Ogier, his progress was halted ten kilometres into Röjden 2 (SS8). His car suffered a broken suspension arm after hitting a hidden rock on a corner.  Kris and Paul Nagle will rejoin tomorrow under Rally2 rules.

As Kris went quickest on Svullyra, his new team mates Craig Breen and Scott Martin set third fastest time. Despite spinning on the next test, the Irishman continued to take the fight to local hero Henning Solberg. He made it back to parc ferme at Karlstad in eighth position, less than two seconds behind his rival.

At close of play last night, Kris said: “We had made a pretty good start to the rally. Without pushing too much, we were third after the morning loop, despite having a less than ideal starting position. Our position became an advantage when the snow started to fall in the afternoon and we grabbed a stage win. I wasn‘t taking any more risks when we ran into trouble on the next stage. We hit a stone buried in the road on a slow corner and the suspension arm broke. Obviously, it’s disappointing but we’ll be back tomorrow to get more experience.”

Craig Breen added: “The conditions were better than we had been expecting, especially this morning. The afternoon loop was more complicated with all this snow. It’s pretty incredible to say that there was too much, when we have been waiting for it to fall all week! I won’t forget the feeling at the end of SS7 in a hurry! I couldn’t believe it when I was told that I had just set the third fastest time... It’s been a fantastic opening day with the Abu Dhabi Total WRT, even though I made a couple of minor mistakes on the last two stages. In total, I must have lost about thirty seconds but I couldn’t be happier this evening. Tomorrow, my goal will be to keep learning and improving.”