Last night's inaugural 'GoRally' event was judged a success by all of those who attended. Some even claimed it a "huge success", not bad for its debut.

The trouble was, an awfy lot of auld codgers turned up. An event staged for newcomers and beginners had attracted significant representation from the past-it brigade all wondering what's going on. But then, that's the pull of our sport.  It never leaves you. Fortunately, they didn't just spectate, they stopped and chatted and spent time with other visitors and the youngsters. Or maybe they had been attracted like moths off the Edinburgh by-pass by the bright lights of the Pentland Land Rover showroom, or maybe even the Tunnock's display of goodies.

Having said that the evening did achieve its desired objective. There were groups of students there from Edinburgh and Strathclyde Universities. Initially attracted by the road rally navigation demo and test, they were enthused and excited by the other more specialised exhibits from the hill, tarmac and forest rallying representation.  And this was what the evening was all about, informing, inspiring, educating and enthusing.

I spoke to one parent and his 12 year old who couldn't wait till he was 14 so he could get started in the 14-17 year-old Junior 1000 series and were already thinking about a car. Another parent with his 23 year old have started building their Citroen C2 for the Ecosse Challenge but were looking for advice and information. They went away overloaded with tips and contacts and a membership form for their local car club.

When you think about it, that was another value of the night. We all tell folk to join a car club as a first step, but if car clubs have no permanent home or don't reveal details of where they meet on their websites, then how do 'outsiders' find out where their nearest club is? It is simple things like this that the rest of us take for granted. It's no wonder those outside the sport think we're a secret society.

At its busiest point mid-evening, there were around 250 souls spread across two floors of the showroom. Take out the exhibit staff, the club and rally reps and the SACC organisers and that leaves around 150 visitors of whom about 50 were already interested parties, that leaves about 100 folk who were there for a genuine nosey.

The 'GoMotorsport' presence was busy, there were 18 serious enquiries about Marshalling and 66 folk had taken the time to fill in the forms seeking more information about specific interests and the sport in general.

It was also good to see so many top stars and past champions there, ready and willing to talk about how they got started, a fact much appreciated by the organisers.

On that basis considered opinion  had it that the evening was successful and should be repeated. That decision will be taken later after the Scottish Association of Car Club organising team have assimilated and reviewed the opinions expressed by those who were there. Lessons were certainly learned on the night, but also much encouragement and goodwill were generated.

There was one very opinionated and successful hard-headed businessman (whose opinions I value and respect because of his business acumen - just don't tell him I said so!) who said: "If you get three genuine new rally drivers out of this event this evening then consider that a success." On that basis I think we exceeded that last night. Already some other club and championship reps are thinking of arranging something similar in other parts of the country.

No names have been mentioned above or specific individuals highlighted. There is a reason for that. This was a team effort. This was the sport getting itself together to do something about it's future. 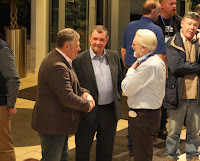