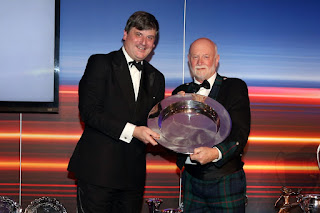 The Motor Sports Association hosted its annual 'Night of Champions' last Friday in a quaint English village called London and was held in the village hall in Pall Mall, just a wee bit bigger than an RAC call box. They also had the electricity in for the night so beans on toast with a cheesey topping was the order of the evening.

Seriously though, it was a grand 'do' and one David Barlow Esq was in attendance to collect his justifiably well earned (and overdue) 'Volunteer of the Year' award - a big shiny soup plate which will no doubt come in handy in the Barlow household.

Never one to rest on his laurels, Saint Digby will be back in action this evening at the 'GoRally' event at Newbridge which gets underway at 6pm.
Posted by John Fife at 11:40