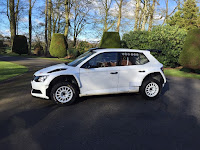 David Bogie picked up his new car at the weekend and although rumours had been circulating widely, the deal ain't done till the metal is sitting in your garage, especially when it comes to Skoda. In  fact this deal has been in discussion for nearly four months. Apparently Skoda is awfy fussy about who buys its factory cars and the deal wasn't verbally concluded till David visited Skoda in Spain last October. 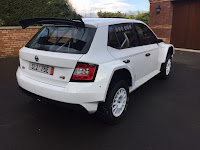 Anyway, the new Skoda Fabia R5 will be run by Carlisle based CA1 Sport and David will contest this year's British Rally Championship. Not only will David continue to have the services of Kevin Rae in the co-driver's seat, he also has a 'spare' co-driver in the wings, although it will be some years before he's ready to don the hard hat and matching bootees. In the early hours of yesterday morning Kevin and Louise became the proud parents of a baby boy. Nice one you two!

The first outing for the new car will be the Llandovery based Red Kite Stages in south Wales on Sunday (21st Feb). This event was chosen ahead of the Snowman because of its location as the British Championship gets underway in Wales on March 5/6.