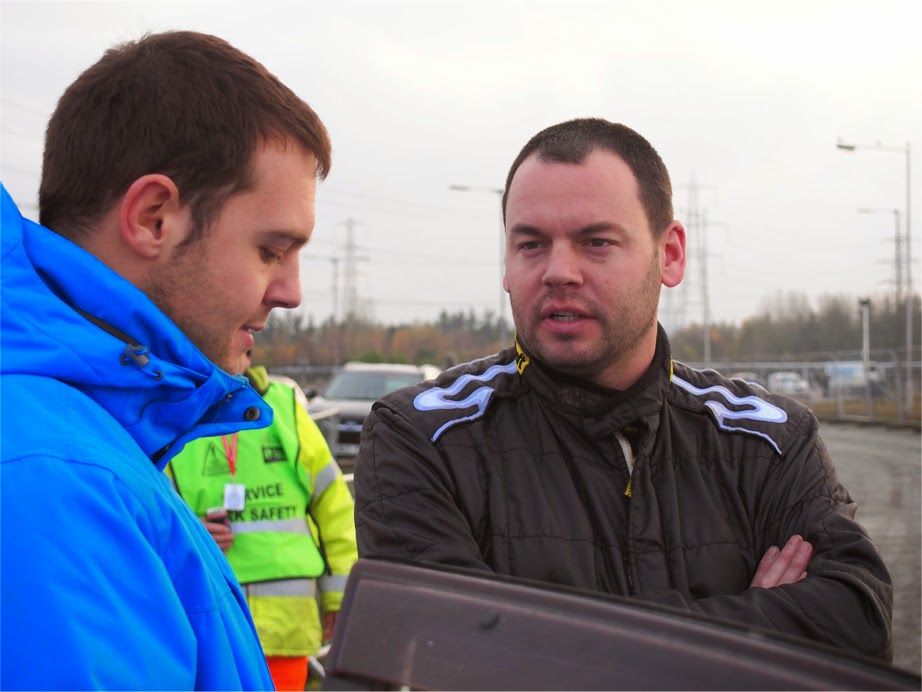 Now don't go taking the times below too seriously. Mike Faulkner has been given a 1m penalty and somehow Barry Groundwater's stage time for Dyfnant has gone missing completely! There would appear to be a few timing anomalies out there today and lots of folk have got penalties, but that wily old fox Peter Foy took a photo of his Time Card before he handed it over after this morning's first three stages, so in theory, Faulkner should still be leading. In theory, Groundwater should be up there too! In practice? We await the outcomes with interest.

Faulkner has had his problems today though: "We should get the 1m penalty sorted out, Peter got the Marshal to initial his change on the Time Card, so we're  not concerned about it. Otherwise it's a been a trying day. The tyres were shot by the time we came out of that last stage and we were tight on fuel through Aberhirnant. So tight we had to turn the anti-lag off. By the time we got to refuel, there was only 4 litres left and there's too many hills around here to risk that."

Gallacher is being very modest about his pace: "It's nothing to do with me," he said, "it's all down to the co-driver. She's keeping me right. On the Scottish Championship rounds, my first two stages are always sh*t and I pick up speed from there. So after yesterday I was ready for this morning, so on the whole it's been better today."

Groundwater was his usual chirpy, happy wee self (not): "The second stage was awful. I was almost off at the first corner when the low sun blinded me, and that put me off for the rest of the stage. But it's been OK since then. I left a door mirror on the chicane in Chirk, the last stage of the day, so maybe someone can go back and get it for me!"

John Morrison is going well too: "The first one was a bit slippy this morning, and the second one was hellish slippy! It's very 'marbly' off line but the times are coming. I'm quite pleased at the moment."

Ieuan Rowlands is still the danger man to our top three though. He had a puncture this morning hence his time loss, but he's powering back into contention and Tristan Bailey is going well but is having gearbox trouble, so the fight ain't over yet.

Geoff Goudie is still hanging in there too and beaming from ear to ear with the experience of it: "We've watched the Rally for the past few years but to be  here doing it is just great. Our best stage this morning was the one we had a problem on - we had fuel surge half way through, but that was our fault. After the compulsory car wash this morning there was a big queue at the filling station so we missed out, but we're still going and happy with our pace. If we finish in the lower 30s that'll be terrific."

( We'll need to wait for Marshals' check sheets to be returned before this will be corrected )
Posted by John Fife at 17:10